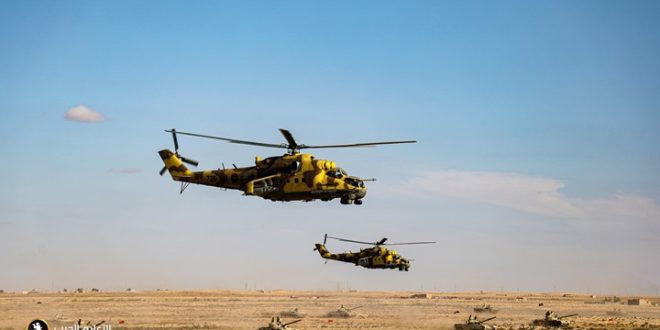 One month after the Libyan military agreement, General Khalifa Haftar’s militia has shown no indication of implementing the accord’s conditions, which require the evacuation of mercenaries from the frontlines of the Sirte-Jafra axis.

On the contrary, Haftar has resumed efforts to mobilise troops and foreign mercenaries on the western and southern fronts of the city of Sirte. Meanwhile, the 5 + 5 Joint Military Commission (JMC) is holding meetings at its permanent headquarters to supervise the implementation of the Geneva ceasefire agreement.

This was confirmed by Commander of the Sirte-Jafra Liberation Operations Room Brigadier General Ibrahim Beit Al-Mal, who stated that the government forces detected extended movements by Haftar’s militia south and west of Sirte and monitored the mobilisation of mercenaries and weapons.

Beit Al-Mal confirmed in a statement on Sunday: “Troops are moving from the east to the west, which indicates that the rebels are breaking the truce and violating the 5 + 5 agreement.”

The 5 + 5 military agreement, which was signed on 23 October in Geneva, included the warring parties’ full adherence to a comprehensive ceasefire, the return of the forces stationed in Sirte and Jafra to their camps and the expulsion of mercenaries from the country within 90 days.

Following this agreement, the JMC held a fruitful meeting in the town of Ghadames (400 kilometres southwest of Tripoli) and another discussion at its permanent headquarters in Sirte. During the meeting, arrangements were made to implement the Geneva agreement, most notably the establishment of military and security sub-committees.

Consequently, Haftar’s endeavour to send military convoys to the frontlines contradicts the spirit of the agreement, which aims to end the conflict and echoes an atmosphere of mistrust amid a vulnerable peace.

The government forces are concerned about new reports by the media regarding Haftar’s recent acquisition of the new Serbian self-propelled multiple rocket launcher, the LRSVM Morava. This was revealed on 14 November during a live-fire test staged by the Tariq Ibn Ziyad Battalion, affiliated with Haftar’s militia.

The Russian news website Topwar suggested that the United Arab Emirates (UAE) provided Haftar’s militia with LRSVM Morava missile launchers, as it was the first foreign country to import the weapon from Serbia. The missile launchers were initially manufactured in 2011 and entered service at the end of 2019.

These developments indicate that Haftar is preparing for a new round of fighting, despite his defeat last June in western Libya, and in light of the UAE’s perseverance in supplying the eastern forces with arms despite the United Nations embargo.

Security ForcesSecurity Situation
All
2020-11-27
asaeid
Previous US diplomat: Washington to use pragmatism instead of negligence in Libya under Biden
Next HoR meeting in Tangiers agree to meet in Ghadames, extend talks to Saturday