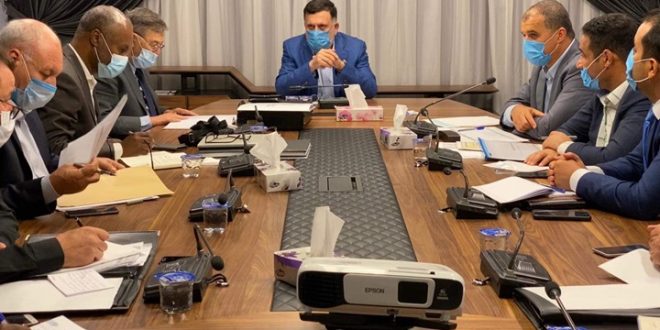 The Libyan Presidential Council issued Tuesday a statement detailing the results of the emergency meeting that was held in the presence of Fayez Al-Sarraj and members of the Presidential Council, Deputy Speaker of the House of Representatives, Head of High Council of State, Chief of Supreme Council of Judiciary, Acting Attorney General, Governor of Libya’s Central Bank, Head of Audit Bureau, Head of Administrative Authority, Minister of Planning, Minister of Finance, and Chairman of the National Oil Corporation.

The meeting discussed the consequences of freezing oil revenues by the National Oil Corporation, as the statement explained that the attendees agreed to activate the role of the joint committee that includes the Governor of Central Bank, Finance Minister, Head of Audit Bureau and other officials from east-based Finance Ministry to coordinate in financial matters.

The attendees called for a subsequent meeting for the board of directors of the Central Bank to find solutions to the issues facing Libya’s economy, urging to discuss mechanism to unfreeze oil revenues and bring things back to normal with an active control and transparency roles.

Al-Sarraj called for this meeting Monday to tackle the repercussions of the freezing of oil revenues by NOC and keeping them away from the Central Bank, which led to soaring exchange rates of foreign currencies to the Libyan dinar at the black market.