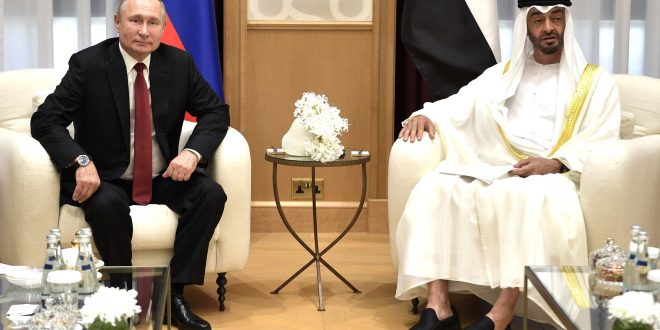 The US Department of Defence has indicated that the United Arab Emirates is financing Russian Wagner mercenaries operating in Libya.

The Pentagon report could have a serious impact on Washington’s relations with the Gulf State.

“The DIA [Defence Intelligence Agency] assessed that the United Arab Emirates may provide some financing for the [Wagner} group’s operations,” said the Pentagon’s Inspector General. Although this is not a direct condemnation, it is the first such official assessment by the Defence Department of the UAE’s role in funding and enabling the Russian company’s operations within Libya.

The Wagner group is reportedly managed and operated by Yevgeny Prigozhin, an ally of Russian President Vladimir Putin. It has been involved across the world in countries such as Ukraine, Syria, Sudan and the Central African Republic.

In Libya, Wagner mercenaries are assisting Field Marshal Khalifa Haftar against the Tripoli-based government. There are claims that they are responsible for atrocities against civilians. Allegations include the laying of land mines in civilian areas when retreating with Haftar’s forces in the summer.

Using mercenaries in Libya rather than Russian troops gives Moscow – and Abu Dhabi – an appearance of plausible deniability. This outsourcing of military involvement led the US State Department to describe Wagner as a “surrogate for the Russian Ministry of Defence”.

Questions remain about whether Wagner relies on Russia for funding or other states, and whether or not the group acts for Russia’s foreign policy interests. The Pentagon report confirms what many already suspect, though; the UAE has been bankrolling the group to help Haftar defeat the UN- and Turkish-backed Libyan government as part of its fight against political Islam in the region.

Why is the Pentagon only now beginning to discuss the UAE’s involvement? Probably Washington’s relationship with Abu Dhabi. According to a former deputy director of the DIA, Douglas Wise, having the DIA issue this report is an easy and less formal and embarrassing way to chide the UAE on its behaviour than a diplomatic note or a press release from the Pentagon or the White House. “It lets the UAE know that we know.”

Another possible reason is that the Trump administration favours the UAE and would not have wanted to derail its normalisation with Israel in August. Now that Donald Trump is on the way out, there is more room to manoeuvre.

Foreign Policy was told by Frederic Wehrey, a senior fellow in the Middle East Programme at the Carnegie Endowment for International Peace, that it was known that there has been battlefield coordination between the Emirates and Wagner. “But the funding is just one more indictment of the Emirates’ collaboration. Now there appears to be a permanent Russian presence on the flank of NATO, and it was enabled by a U.S ally.”