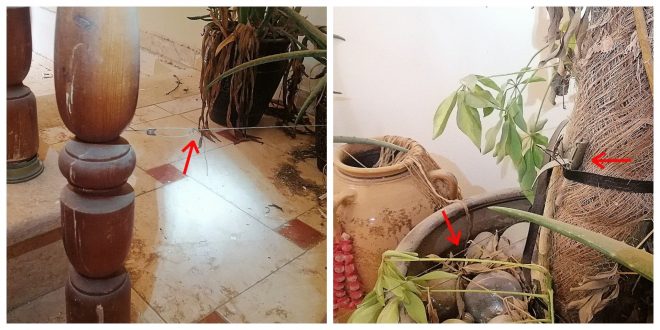 Booby-trapped bodies and trip-wire toys: The perils of clearing Tripoli of mines

When Colonel Naji al-Garabli pushes the detonator, dirt, smoke and sand punch up into the air. A stomach-rattling boom shakes the ground.

As the dust settles, faces with probing expressions re-appear in overlooking windows, wondering if the danger has passed.

Garabli, a military engineer tasked with removing explosives, has just detonated a live hand grenade found in a yard in Ain Zara, a western Tripoli suburb chewed up by conflict.

“Our aim is to clear the area so people can return to their homes,” he tells Middle East Eye.

Grenades are just the beginning. In April 2019, Tripoli’s suburbs became the frontline as eastern commander Khalifa Haftar unsuccessfully fought to seize the Libyan capital from the Government of National Accord (GNA).

Though his Libyan National Army (LNA) collapsed in June 2020 and has now retreated to the east, the streets Haftar’s forces used as a battlefield have been left in tatters.

Until recently, roads into these districts were impassable, with rubble and roadblocks sprawled across the tarmac.

Though they have gone, the names of LNA fighters killed in the fighting remain scrawled in paint, as well as the cities they hailed from: Tobruk, Tarhuna, Ajdabiya, Benghazi.

More dangerous are the thousands of mines, booby-traps and explosives left by the LNA and now being navigated by GNA military engineers and Tripoli’s residents.

“We work with poor equipment, and have so much to do,” Garabli says. “But we have to keep moving, no matter what.”

The quantity of explosives left behind, and the danger they pose, is vast.

On 24 November, a 10-year-old boy was killed by a mine in the southern neighbourhood of Wadi al-Rabie, one of more than 70 civilians to lose their lives in such incidents since May. Another 125 people at least have been wounded by blasts, many of which resulted in amputations.

Meanwhile, the GNA, which pushed back Haftar’s forces thanks to military backing from Turkey, has detonated more than 50 tonnes of explosives found in Tripoli during the past six months. Among them were an estimated 700 booby traps and mines, including one reportedly attached to a teddy bear.

In a hallway, a tripwire is stretched between a flight of stairs and a plant pot, which conceals a grenade (supplied)

Hand grenades fitted with tripwires have been found in houseplants and in stairwells. A Greek cigarette carton attached to a mine was found in one living room beneath a pink blanket, tempting smokers into an early grave.

Anti-tank mines were fitted by the LNA to explode if removed by any unsuspecting engineer or resident.

Underneath a blanket, a Russian PMN-2 mine is attached to a cigarette carton: reaching for the box will trigger the device (MEE/Daniel Hilton)

Colonel Omar al-Rutb, who oversees the clearing, tells MEE: “There have been many challenges. We found very modern booby-traps, indicating there were elements in Haftar’s ranks specifically tasked with laying traps.”

Two military engineers have been killed and 15 wounded so far during the GNA’s clearing operation. The most sophisticated mines and traps are suspected to have been left by the Wagner Group, a Kremlin-linked military contractor hired by Haftar.

“I’m not sure if it’s lucky or not to face traps placed by Wagner or people trained by them,” says Rutb. “On the one hand it’s far more dangerous, but on the other we have all learnt a lot and have more expertise now.

“When you learn, you play with lives.”

The vast majority of recovered ordnance, if it is not detonated on the spot, is temporarily brought to a military base on the outskirts of Tripoli.

Here lie piles of rockets, mortar bombshells, ammunition of all kinds and rocket launchers, and even an intact Turkish MAM-L smart micro munition – a small, laser-guided bomb most likely dropped by one of the many drones Turkey provided to the GNA.

In a bucket are the remnants of fragmentation rocket warheads. Commonly launched from helicopters or land cruisers, the warhead bursts into uniform-sized pieces on detonation.

“You can imagine how messy that gets. That’s a lot of metal flying around,” Mark Hiznay, associate director of Human Rights Watch’s arms division, later tells MEE.

Much of the weaponry and ammunition left over by LNA-GNA clashes is from the Gaddafi era: British-made squash-head artillery projectiles; French-produced rockets; Belgian anti-tank mines.

Russian-made mines laid in Tripoli’s streets and houses were not seen in Libya until Khalifa Haftar’s offensive on the capital. They were likely provided by the Wagner Group, shadowy Russian mercenaries employed by Haftar’s Libyan National Army (LNA).

The types found since fighting in the capital ended in May include:

Russian-made devices that come in two colours: green and brown. The top of the PMN-2 has a black circle with a cross on, which is the pressure plate.

These are designed to either detonate when stepped on, or with a weight release. The PMN-2 is infamous for mutilating the legs of those who step on it.

The MON-50 and MON-100 found in Libya come in a standard Soviet green and dark brown varieties. In the United States they are known as claymore mines.

The MON is stood vertically on its on legs. If you are in front of the mine then you would be faced by a slightly curved rectangle.

The device is triggered either electronically or by a tripwire. It then explodes directionally, sending out a 45-degree blast radius and shards of metal sheet backed by plastic towards its target.

The device, which is usually olive green, is buried in the ground. When activated, it leaps a metre into the air before detonating, sending shards of its cast iron body and steel fragments out in a 360-degree blast radius.

Like the MON, the OZM-72 can be triggered by command or through a trip wire. Victim-activated detonation through tripwires is banned under international law.

The PAM-2 was originally designed to be scattered from helicopters, rockets and launchers.

When it falls on the ground, it rights itself on its six legs and shoots out spring-loaded tripwires. If anyone touches the tripwire, a cylinder launches one metre into the air before detonating.

Silver containers used to deploy PAM-2s from trucks have been recovered from battlefields across Libya. But bomb disposal experts have also recovered green cylinders that are used to hand place PAM-2s like a grenade – a tactic employed by Wagner in Ukraine.

Also stacked up in the depot are Russian Kornet anti-tank missiles, Gaddafi-era cruiser weapons that have proliferated from Libya into Palestinian and Syrian hands. But many of the armaments were introduced to Libya only recently.

MEE shared photographs with Hiznay of different types of mines found in Tripoli: they were, he says, Russian-made and not seen in the country until Haftar’s offensive.

“This is not Gaddafi stuff, this is Wagner stuff from Russia,” he tells MEE.

Middle East Eye asked the LNA for comment, and whether its forces had encountered anything similar from the GNA side, but recieved no response by the time of publication.

It’s one way the authorities have tried to stop residents returning home and risking their lives before an area has been cleared.

But Tripolitans, naturally, are desperate to go home. And there are a lot of them: around 150,000 to 200,000 inhabitants of the city are believed to still be displaced by the fighting.

Haftar’s assault was fast and brutal. Thousands of Libyans found themselves suddenly trapped in the fighting, as rockets, mortar bombs and air strikes cascaded down on their neighbourhoods.

“Honestly, it was terrifying. It happened so quickly,” says Yehia, an Ain Zara resident.

Soon after the LNA pulled out, Yehia made his way back to his house. Though his home was free of mines, the sky stared down at him through two gaping holes in the roof. “I built this house myself, and now it will take $10,000 to repair it,” he says.

Keeping people from returning home and picking up the pieces before the area has been cleared is a challenge, says Brigadier General Salem al-Furjani, particularly after so much time.

“An awareness campaign was launched by the military telling people not to go back to their homes, and hotlines were set up so people could contact the military if explosives were discovered,” he tells MEE.

“We expected people would rush back to their homes after the fighting, so ran campaigns and tried to lock neighbourhoods down, but there have still been accidents.”

The displaced of Tripoli

The longer Tripoli’s residents are displaced, the greater their need to return.

Libyans with better resources have been able to stay with friends or family, or rent temporary homes. But the poorer have been forced to reside in collective shelters or squalid rentals.

Some, Liam Kelly of the Danish Refugee Council tells MEE, have resorted to sleeping rough in conflict-damaged buildings or unfinished constructions.

“There is also an unusual phenomenon of poorer Libyans being evicted from their homes to accommodate richer families who are prepared and able to pay extortionate sums for rent, effectively displacing the original inhabitants,” Kelly says.

A damaged home in Ain Zara. This neighbourhood was on the frontline of the LNA assault on the Libyan capital (MEE/Daniel Hilton)

The work isn’t likely to conclude any time soon. The GNA believes around half of the area at risk of contamination is yet to be checked – around 500 square kilometres, although population density decreases the further away from central Tripoli they work.

And without the infrastructure to verify and record casualties, the numbers of people killed in explosions is probably higher than official numbers suggest. The lists of recorded victims do not, for example, include migrant workers, who are often employed to clear areas damaged by the conflict.

“They usually don’t have access to healthcare, either because of a lack of documentation or a lack of money, and so they don’t get treated properly or the incidents recorded,” Kelly says.

Danger remains in the unlikeliest of places: recently, medical workers in southern Tripoli trying to retrieve a body found the corpse booby-trapped.

In the Libyan capital, even the dead are a threat.