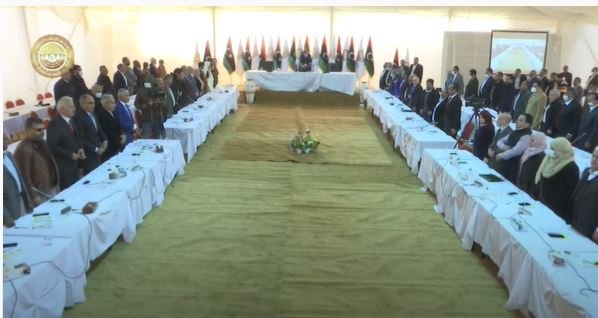 A consultative session of a reunified House of Representatives (HoR) meeting in Ghadames has agreed to continue to meet and set out its agenda.

The final statement today announced that the next meeting will be held in Ghadames again from 21-22 December. There had been discussion of moving to Sabrata for logistical reasons. It was ultimately thought that Ghadames was a more neutral venue.

The statement said that this first session was devoted to discussing the most important issues impeding the reunification of the HoR. It stressed that the HoR was now effectively reunified with the participation of 127 members in Ghadames. The statement said members were eager to give other members another chance to attend the next session in order to build more bridges of trust.

The statement added that the next session, which is scheduled to be held in Ghadames on Monday and Tuesday, 21 and 22 of this month, will discuss:

On the first day (Monday 21 December):

On the second day (Tuesday 22 December):

A rejection of an increasingly marginalized Ageela Saleh?

Politically, the Ghadames HoR consultative meeting is a clear political slap in the face for the current constitutional head of the HoR, Ageela Saleh. Saleh had wanted the HoR to meet under his leadership in either Sirte or Benghazi. His convening yesterday of a rump of 20 loyal HoR members in Benghazi rings hollow. This contrasts with the claimed 127 members in Ghadames.

What is the constitutional position?

However, the 2015 Skhirat Libyan Political Agreement (LPA) recognizes the (now) Benghazi-based HoR as the exclusive Libyan parliament. This happens to be under the leadership of Ageela Saleh and until a quorate of members meets and removes him, its unclear what the constitutional position will be.

The above announced agenda for the next Ghadames HoR meeting plans to re-elect the HoR’s leadership. It will be up for debate as to whether this would be a leadership for the unofficial consultative HoR or whether it will regard itself as the leadership of Libya’s new reunified HoR. This will put the international community in a quandary between the constitutionality of the LPA and recognition of a new political reality.

What is the HoR quorum?

The question of what number of members makes an HoR quorum is very contestable. The debate is between 120 and 130 members. It will be recalled that originally 200 were elected in 2014 to the HoR. However, a number of members have lost interest and failed to turn up to sessions. On the other hand, HoR member Siham Sergiwa was sadly kidnapped and feared dead. Faiez Serraj gave up his seat when he became leader of the Tripoli government.