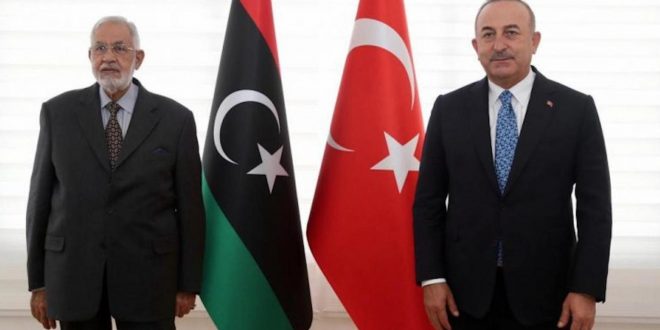 The Libyan Foreign Minister Mohammed Sayala said Monday there are some countries that are fueling conflicts in Eastern Mediterranean for “revenge”, warning of “confrontation and clashes” and hailing Turkey’s proposal to hold an international conference on the region’s issues.

In a meeting with his Turkish counterpart Mevlut Cavusoglu in Antalya, Sayala said the Mediterranean is a priority for international and regional policies and a basis for rivalry or even conflict, according to the Libyan Foreign Ministry.

“Signing the border demarcation MoU in the Mediterranean between Libya and Turkey was a cooperation based on legal and legitimate laws locally and internationally. The MoU was approved by the UN. The MoU isn’t against any country and doesn’t encroach on any country’s territories.” Sayala said.

He also criticized “rushing” to sign similar agreements by some countries and “forming geopolitical alliances” like the EastMed Gas Forum, which didn’t take into account the interest of countries as they were just a reaction move.

“The entry of some countries which aren’t part of the Eastern Mediterranean region into the situation and their attempts to undermine the Libya-Turkey agreement and to fuel the conflict for revenge’s sake made things more complicated”, Sayala said, reiterating strong relations between Libya and Turkey in all fields.

“Turkey was among the first countries to assist Libya’s GNA in the tough times in the last two years, which led to more hopes for reaching a political settlement to the conflict.” Sayala remarked.