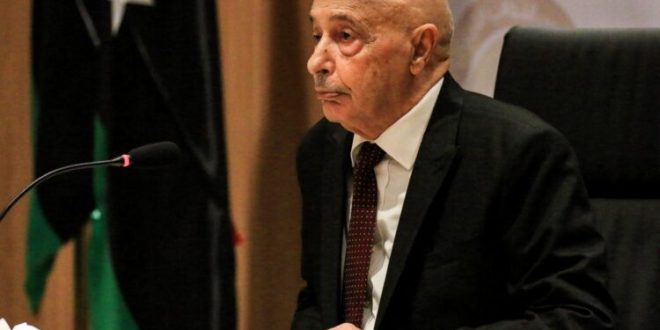 Asaad Al-Shartaa, the Official spokesperson for the breakaway Libyan Parliament in Tripoli, the House of Representatives (HoR), today described the dismissal of 35 HoR members as a political and illegal manoeuvre, the Tripoli based state LANA news agency reported today.

Shartaa’s comments came after news circulated today that Ageela Saleh, the constitutional head of the internationally recognized HoR based in Benghazi, had dismissed 35 boycotting and breakaway HoR members.

Media reports say he has referred them to the Public Prosecutor on charges of calling for the division of the country and spreading division, chaos, and sedition.

Shartaa said the HoR’s bylaw states that revoking membership for any member elected by the people needs to be voted on by an absolute majority of HoR’s members, which is 50 + 1, and therefore, no member has the right to drop the membership of another except according to these regulations.

He stressed that the procedures for revoking membership of any member are within the competence of the HoR collectively and in a valid session with full quorum and with the approval of the absolute majority of the members.

Its notable that the official media pages of the internationally recognized HoR has not carried the news. This could indicate that it is indeed nothing more than political manoeuvring. Ageela Saleh had threatened to dismiss boycotting and breakaway members before, but he could never muster enough members to attend to make it credible.

Saleh’s move is seen as a reaction to the 127 HoR members who have deserted him for the reunification meeting in Ghadames. They are in discussions about who should lead them. Saleh wants them to come and meet under his leadership in Benghazi or Sirte.

He is, however, unpopular, and there is a move to topple him. Salah could be on the way out of the political scene. His support of Khalifa Hafter in the war on Tripoli has gained him the enmity of most of western Libya. His leadership of the constitutional HoR is his only trump card. If he loses it, he becomes irrelevant. He is, therefore, reacting in a pre-emptive move to avoid that. His loyal rump of supporters in Benghazi are no more than 20 members. This compares embarrassingly with the 127 who have been meeting in Ghadames.

For now, Saleh has the constitutionality behind him, but he does not have the numbers behind him. The Ghadames bloc are trying to find a way round him. He represents the status quo – the Ghadames 127 represent the future, the UNSMIL-brokered Libya Political Dialogue Forum (LPDF) and the planned 24 December 2021 parliamentary and presidential elections.

Saleh could therefore be described as a political obstructer. The international community has vowed it will not allow political ‘‘dinosaurs’’ to block the progress of the ongoing political dialogue. Something has to give.