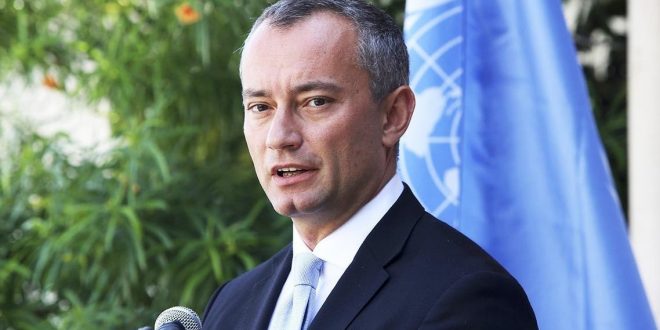 Bulgarian diplomat Nickolay Mladenov has told UN Secretary-General Antonio Guterres he will be unable to take up the role as United Nations Libya envoy next year due to “personal and family reasons,” a UN spokesman said on Tuesday, reports Reuters.

Mladenov has been the UN Middle East envoy since 2015, charged with mediating between Israel and the Palestinians. The UN Security Council last week approved Guterres’s proposal to appoint Mladenov as Libya mediator and Norwegian Tor Wennesland to succeed Mladenov as Middle East envoy.

Mladenov told Guterres on Monday that when his current role finishes on December 31 he will resign from the United Nations and “will not be able to take up the position as special envoy for Libya … for personal and family reasons,” UN spokesman Stephane Dujarric told reporters.

Acting Libya envoy Stephanie Williams will continue in the role, Dujarric said. Mladenov was due to replace Ghassan Salame, who stepped down as the UN Libya envoy in March due to stress.

Libya descended into chaos after the NATO-backed overthrow of leader Muammar Gaddafi in 2011. In October, the two major sides in the country’s war – the internationally recognized Government of National Accord (GNA) and Khalifa Haftar’s eastern-based Libyan National Army (LNA) – agreed a ceasefire.