Home / Normal / Al-Shartaar: No one has the authority to dismiss members 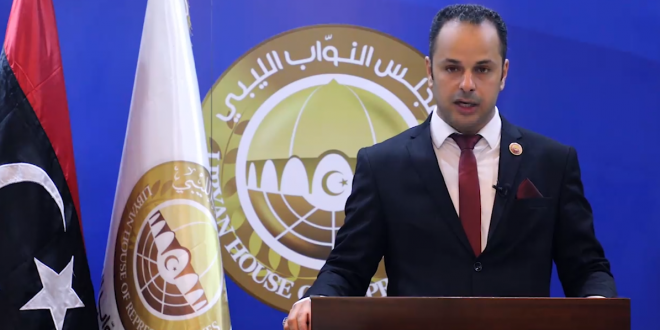 Al-Shartaar: No one has the authority to dismiss members

Asaad Al-Shartaa, the Official Spokesperson for the Tripoli-based House of Representatives stated that the dismissal of 35 members of parliament is no more than a political manoeuvre with no legal grounds to support it.

In a statement to the Libyan news agency, Al-Shartaa stated that the list of 35 members dismissed from parliament by Aguila Saleh is illegal and that no singular member of the HoR has that authority and that by constitutional law only a majority vote of 50 + 1 can dismiss members from the House.

Al-Shartaa stressed that the procedures of dropping memberships from the House of Representative can only occur in the full quorum meeting of the parliament and a majority vote.

The spokesperson’s statement comes as a response to attempts by Aguila Saleh, head of the Tobruk based House of representative to dismiss 35 members of parliament and reporting them to the Attorney General for splitting from what he considers to be the legitimate legislative body of the country and allegedly supporting sedition and division in the nation.

Saleh’s move to revoke memberships from parliament representatives can only be seen as a reaction to the ongoing 127 HoR member meetings in Ghadamas in which a key issue is the voting for a replacement for his post in the house of representative and unifying the country’s legislative body once and for all.

Legislation
All
2020-12-24
asaeid
Previous Sirte-Jufra Operations Room says ready to repel any attacks by Haftar’s forces
Next Italy: Release of fishermen in Libya made in return for restoring relations with Haftar