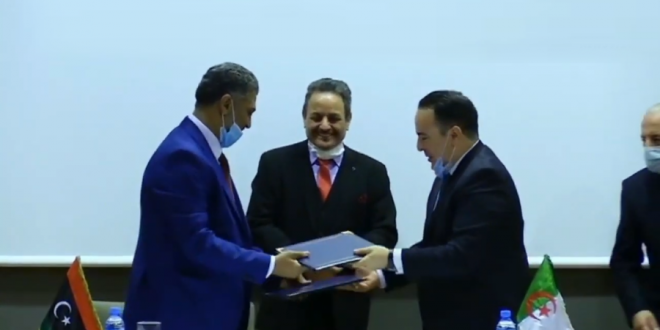 The General Electricity Company of Libya (GECOL) signed Sunday an agreement with Algeria’s Sonelgaz to expand cooperation in gas and electricity production and distribution.

GECOL’s CEO, Weam Al-Abdeli, said in a press conference in Algeria after signing the agreement that cooperation with Algeria came after exchanges of work between the two sectors as Sonelgaz’s teams helped last October to repair Al-Khums power plant in ten days.

Meanwhile the General Manager of Sonelgaz Chaher Boulekhras said the new agreement with Libya’s GECOL came after the agreement in production that was signed earlier between the two countries; and this deal expanded to distributing electricity and gas as well as renewable energy, in which ” Sonelgaz has experience, including in engineering and maintenance of power plants.”

Boulekhras added that the partnership with the Libyan GECOL is a win-win situation, saying a work committee will be formed in the coming days to cover different fields of cooperation between the two countries.