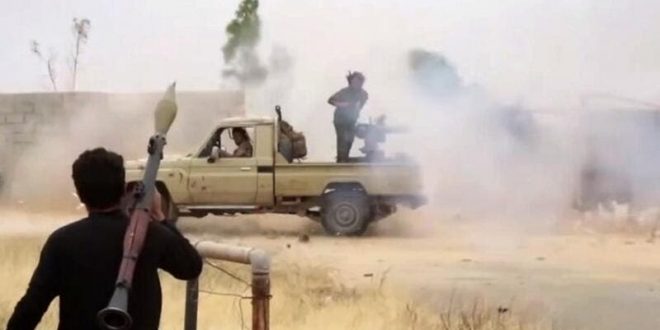 Clashes renew in Sabha between GNA and Haftar’s forces

Clashes renewed Monday between forces of the south military zone of the Government of National Accord and a brigade loyal to Khalifa Haftar’s forces in Sabha.

A source from Sabha said clashes renewed after Haftar’s forces had attacked headquarters of south military zone, entering some of their camps before backup for the GNA forces arrived allowing them to regain control of the headquarters and later attack Haftar’s forces in downtown Sabha.

The source said the Sabha military zone forces controlled the headquarters and other areas in downtown the city, positioning fighters in there for hours after the backup had arrived from Ubari and other areas, and then returning to their previous positions.

No official authority from both sides have made any statements about the clashes of Sunday and Monday, while normal life activities resumed shortly after the clashes ended, according to the source.

Tensions are still high at the area of the clashes in Sabha with mobilization of forces depicted on both sides.

Sunday clashes took place when Sabha military zone officers of the GNA gathered to read out a congratulatory statement of Libya’s Independence Day and the GNA-commanded Libyan Army parade that was held in Tripoli on December 24.

Haftar’s forces blocked a road near GNA’s Sabha military zone, whose personnel opened fire on the fighters blocking the road, thus leading them to respond to the source of fire.