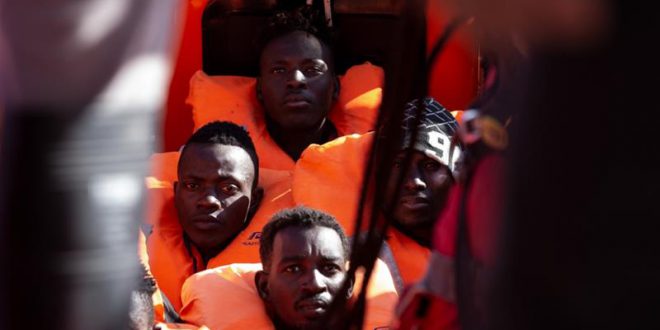 As the death toll from shipwrecks in the Mediterranean continues climbing, in the Horn of Africa Ethopia’s Tigray region is unraveling into deadly violence between the central government and the Tigray People’s Liberation Front (TPLF).

With aid to Tigray blocked, internet and phone lines shut down, travel in the region banned, and media access severely restricted, fears of war crimes or even genocide have been running high. Simultaneously, concerns are growing daily that the conflict could spill over into Sudan, Eritrea, and Somalia. This will naturally instigate further migratory movements towards North Africa and towards Europe, as refugees seek safety, aid, and long-term protection.

But instead of offering safe passage to millions fleeing war and persecution, over the past decade, the EU has funded a wide array of notorious border control measures, and engaged in agreements and backroom deals with Libya, Morocco, Tunisia and Algeria, to block refugees from ever reaching the Mediterranean coast.

These “externalisation” policies go as far as funding nefarious elements in Sudan by providing financial aid directly to Sudan’s security sector which orders the Rapid Support Forces (RSF) to prevent refugees from crossing borders into Libya. The RSF stems from the Janjaweed paramilitary group which has a violent and bloody legacy in Darfur. Through these externalisation policies, the EU has essentially pushed its borders deep into Africa by outsourcing its violence and policing to some of the continent’s most vicious war criminals and human rights abusers.

Yet, during the past six years the media and politicians have instead focused on a rhetoric of “refugee crisis”, a misnomer which provided the EU cover to militarize its borders against a fictitious “invasion”. The “crisis” rhetoric has made a solid cover for EU politicians to blame an abstraction for their own policies and deterrence measures that have resulted in thousands upon thousands of preventable refugee deaths.

According to the International Organization for Migration (IOM)’s Missing Migrant project, 1,220
people died attempting to cross the Mediterranean Sea in 2020. Within less than two weeks of 2021 already 18 deaths have been recorded. In just 72 hours, between November 9 and 12, at least 100 people lost their lives at sea in four separate shipwrecks, while NGO Search and Rescue (SAR) ships were blocked from conducting life saving missions by Italian authorities. This has totaled up to over a devastating 20,000 innocent people having lost their lives at sea since 2013 – a direct consequence of policies designed to ensure refugees don’t become the responsibility of Europe.

When African refugees do manage to reach coastal points along the Mediterranean Sea, they face coastguards in African waters. If they make it close to European shores, they then face EU coastguards and FRONTEX border patrol agency. In both cases, refugees often end up being unlawfully returned to their home countries where they are exposed to persecution and war, or returned to unsafe third countries such as Libya, where they are at risk of torture in “migrant detention centres”.

Since 2017, when the EU and Italy began funding, equipping, and training the Libyan Coast Guard, at least 40,000 people have been intercepted on their way to Europe and forced back to Libya. This, despite reports that at least 85 percent of all refugees and migrants who have traveled through Libya have endured torture and inhuman and degrading treatment. The complicity of Italy and the EU in the torture of migrants and refugees in Libya was underscored by their continued support to Libyan authorities with the renewal of the Memorandum of Understanding in February 2020.

The European Committee for the Prevention of Torture noted in its visit in 2017, that facilities on the ‘hotspot‘ islands of Italy resembled detention centres, not accommodation facilities; surrounded by high metal fences, large gates, and a heavy police presence. Once recognised as refugees, many end up on the streets. In the province of Foggia alone, 2,500 people are living in eight illegal settlements, with no state support and the constant threat of police evictions and violence.

EU abuse of African refugee rights is evident from within EU borders all the way through externalisation policies in Africa. In June of 2019, human rights lawyers Juan Branco and Omer Shatz submitted a complaint to the International Criminal Court (ICC), that EU policies violated international law and the treatment of refugees amounted to “crimes against humanity”. Still, Merkel signed an agreement extending its cooperation with the Libyan coastguard.

“The consequences are thousands and thousands of deaths, and for the EU that’s successful” said Bronco. Now, as the war in Tigray will naturally send thousands fleeing towards the militarised borders of North Africa and Europe seeking protection, it is imperative to shift the public discourse to an ongoing struggle of refugees, not a “refugee crisis” and to put the UN, EU and the politicians responsible against the wall.

These are man-made political problems with political solutions. The laws that have created and maintained “Fortress Europe” must be untied and undone by EU politicians or destroyed by us. This ongoing battle for freedom of movement, the right to live in peace with dignity away from war and persecution – and the abolition of borders – is a continuation of Africa’s anti-colonial political tendencies known by its adherents as the Refugee Struggle.

This is not a refugee “crisis”.