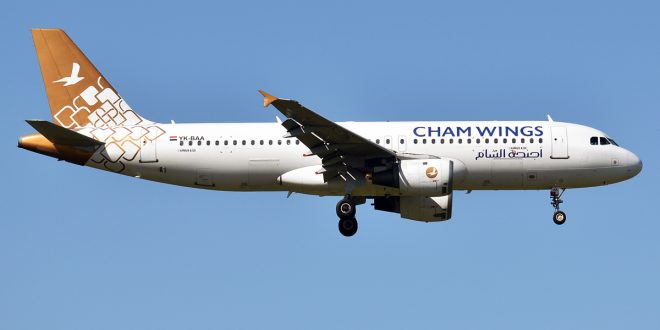 The World Health Organization (WHO) in Libya has published a photo on its Twitter account for the US-sanctioned Syrian airliner, Cham Wings, bringing “medical supplies” from its Dubai-based offices to Benghazi in eastern Libya.

WHO’s Representative in Libya, Elizabeth Hoff, said in a comment published by WHO Libya that the supplies would be used to support services in health care facilities as well as strengthen the health response to the COVID-19 pandemic.

Cham Wings is owned by Bashar Al-Assad’s brother-in-law and is sanctioned by the US for transporting weapons and fighters between Russia and Syria.

Cham Wings has also been depicted carrying over 22 flights to Benghazi bringing mercenaries from Syria to Libya’s eastern region to fight for Khalifa Haftar, according to the media office of the Volcano of Rage Operation.

UN panel of experts monitored last year 33 flights for Cham Wings landing in Libya, and the panel added that when asked about whether the airliner was sending weapons and mercenaries to Haftar, Syria’s response wasn’t sufficient.

The media office of the Volcano of Rage Operation said Cham Wings’ flights take off from Damasacus Airport or Russian Hmeimim airbase in Lattakia and land in Benina Airport in Benghazi or UAE’s Al Khadim airbase in Al-Marj in eastern Libya, hiding off the radar once in Libya airspace.

Health SituationInternational Relations and Cooperation
All
2021-01-11
asaeid
Previous Libya, Italy discuss aspects of cooperation in justice field
Next How the EU’s inhumane border ‘pushbacks’ are keeping refugees in Africa