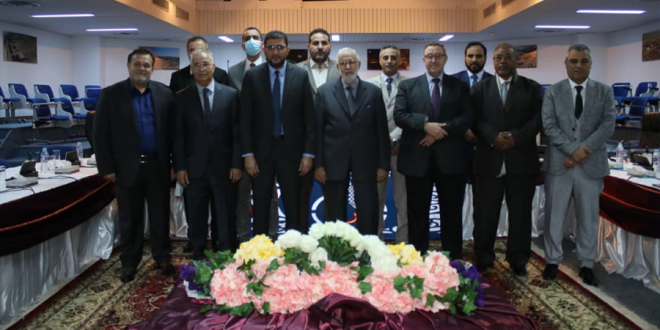 A delegation from western and eastern Libya met today at Sirte Oil Company’s offices in Brega, eastern Libya to discuss the reunification of the country’s budget.

It will be recalled that the reunification of western and eastern Libya’s budgets was part of the Maetig-Hafter resumption of oil production-exports agreement of September 2020.

The agreement published by Maetig proposed:

1-The immediate resumption of oil production and exports from all oilfields and ports.

2-The creation of a joint technical committee to oversee oil revenues and ensure their just distribution for the next three months.

3-The unification of the LD official exchange rate or foreign currency sales surcharge for all.

5-Resumption of opening of Letters of Credit and bank transfers for all products.

6-Putting in place an appropriate mechanism to benefit from the foreign exchange sales surcharge in financing development projects.

7-Additional finance to be offered to the National Oil Corporation (NOC) to increase production to previous levels within the agreed financial oversight mechanism.

The Role of the committee

2-Oversee the transfer of agreed money through the Finance Ministry

5-Oversee complaints from banks against the CBL

6-Oversee functioning of the bank clearance system without external interference

7-To investigate demands for additional allocations

10-The committee will continue its work until a national unity government is formed to run the country.

If the meeting reaches a successful outcome, its significance on Libya’s politics could be considerable. In short, the reunification of the country’s budget, for the first time since the 2014 Libya Dawn Tripoli militia coup led to the country’s de facto split, would mean the internationally recognized Libyan government in Tripoli would accept and absorb the costs of Hafter’s war on Tripoli.

There are sections as well as militias in western Libya who still strongly oppose any rapprochement with Hafter. This includes Faiez Serraj, who had vowed he would never sit down and negotiate with the ”war criminal” with ”blood on his hands” Hafter again after feeling that the latter had been deceitful to him.

Indeed, Libya Herald had written at the time: ‘‘With regards to the public debt accumulated by eastern Libya, the agreement seems to incorporate it with the western national debt – which, in itself, is politically very contentious in western Libya. It means the Tripoli CBL subsidised Hafter’s war on Tripoli and all the destruction it caused.’’

It will be recalled that it was Ahmed Maetig, Deputy head in the Presidency Council headed by Faiez Serraj, who published on an official Libyan government Facebook page the terms of the agreement with Khalifa Hafter for the resumption of oil exports.

The success of the Maetig-Hafter agreement has thrust Maetig up the pecking order for any future leading posts such as prime minister of president. It has, on the other hand relegated Serraj in his political standing.

The Maetig-Hafter agreement seemed impossible at the time. Hatred of Hafter by civilians and especially militias is high. Indeed, it was expected that Maetig would come under immense political pressure, if not some kind of physical threat, after he had published the agreement. Reports at the time said Maetig was prevented by militias from presenting the agreement at a Tripoli press conference in his own hotel.

Today, the more hawkish militias in western are still unhappy with the rapprochement with Hafter and see it more of appeasement than a peace deal. This includes militias in Maetig’s city, Misrata. The deaths to militias and civilians, including by booby-traps, the indiscriminate bombing of civilians and civilian areas, and the destruction to southern Tripoli, made negotiating with Hafter on an equal footing difficult.

At the time of publication, the deal was seen as extremely ambitious and more pertinently, one sided. It seemed to entail Tripoli giving much to eastern Libya in return for the resumption of oil exports.

An indication of this resistance to the deal was the refusal by some pro-Tripoli factions to reopen the main coastal road as part of the tension-easing measures proposed by the UNSMIL-brokered 5+5 Joint Military Commission (JMC). They insist on the Hafter forces, including foreign mercenaries such as Wagner, on withdrawing and demining the fields they had laid. Other dovish pro Tripoli militias withdrew from the frontline – as prescribed by the ceasefire.

Progress being achieved in Maetig-Hafter agreement and ceasefire

However, in reality, some progress is being made. The fighting stopped in June last year. A ceasefire was signed in October which has overwhelmingly held. An UN agreement to send ceasefire monitors has been agreed. Prisoners of war have been exchanged on more than one occassion.

The reunified board of the CBL has met for the first time in 5 years. The official LD exchange rate has been unified and devalued. Oil revenues are flowing but are frozen in an escrow account until both sides reach a political settlement.

The CBL is to resume the reopening of Letters of Credit for exports and the sale to citizens of hard currency at the official rate. The suspended bank clearance system is to be reopened and the whole banking system threatened by collapse. could be saved. And now a reunified budget is being discussed. Flights between the west and east have resumed.

So, it is a matter of perspective as to weather the ceasefire and Maetig-Hafter agreement have been successful. Clearly there is a lack of trust between the two sets of military forces. It is hoped that with the arrival of neutral international ceasefire monitors, the main sticking points of the ceasefire could achieve progress.

These include the withdrawal of all foreign mercenaries and forces from Libya within 90 days from 23 October; the suspension of all training of troops domestically and abroad; the suspension of all international defence agreements; the formation of a Joint Operations Room for a joint police and military force; the identification and categorization of all militias and a mechanism for their reintegration (DDR); reorganizing the Petroleum Facilities Guards (PFG); referring the agreement to the UN Security Council to adopt in a Resolution.

It will be recalled that the ceasefire had called for: