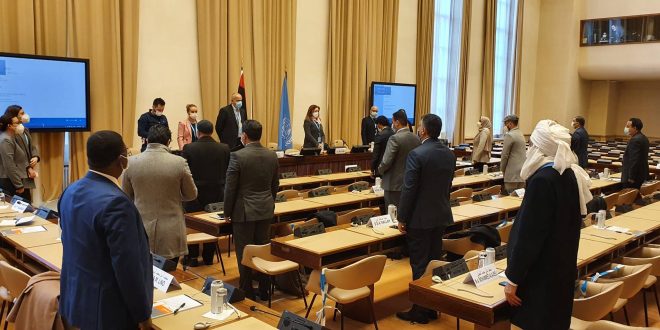 he Advisory Committee of the UNSMIL-brokered Libyan Political Dialogue Forum (LPDF) started its 4-day face-to-face meeting to ‘‘encourage agreement, compromises and reassurances’’ to come up with recommendations to the 75-member LPDF for selecting the mechanism for choosing a unified interim government to guide Libya to the planned 24 December 2021 elections.

The Advisory Committee was formed after the main 75-member LPDF failed to choose one of the proposals for a mechanism with the needed pre-agreed majority.

‘‘Ladies and gentlemen, members of the Advisory Committee,

On the occasion of the Amazigh New Year, the United Nations Mission extends its best wishes to all the Amazigh of Libya, and hopes it will be a prosperous and peaceful year, and that Libya witnesses positive developments that fulfil the aspirations of all components of the dear Libyan people. I welcome you here at the United Nations Headquarters in Geneva. Allow me to welcome Sheikh Muhammad Al-Barghouti, who will join us through the video conference as he was unable to travel and attend the meeting in person.

Progress has been made

At the outset, I would like to hail the progress made in the various dialogue tracks, whether the achievement of the 5+5 Joint Military Commission or the economic track with the excellent meeting that took place yesterday in Brega, as well as the humanitarian situation.

On the political level, much has been accomplished in Tunis during the LPDF meeting, including the endorsement of the Roadmap for the preparatory phase for a comprehensive solution; the eligibility criteria for executive authority positions; the prerogatives of the unified executive authority; and most importantly, setting a date for the elections, which should take place in 345 days from now. This unwavering achievement, this date to return the sovereign decision to its rightful owners, is our top priority.

Selection mechanism process for next unified interim government has stalled

Yes, the LPDF has accomplished a lot, but since Tunis [meetings], we have not seen any progress on the selection mechanism of the unified executive authority and the LPDF was stalled. This is why your esteemed Committee was formed, to come up with recommendations about the formation of an interim, unified executive authority that shoulders the responsibility in a participatory manner and not on the basis of power-sharing, as some believed. We want a participatory formula where there is no victor no, a formula for coexistence for Libyans of various origins for a specific period of time until we pass on the torch.

I know and your colleagues, who selected you to join this Committee, know, that you enjoy a high patriotic spirit and the selflessness required to uphold the ultimate national interest.

The luxury of time is no more possible

As I mentioned earlier, we cannot discuss and embark on an open-ended process without a timeframe, because the luxury of time is no more possible. Therefore,  we decided to organize a face-to-face meeting for the Committee to encourage agreement, compromises and reassurances that the direct meeting allows.

We want a Libyan-made solution, not a solution imposed from the outside.

We want a Libyan-made solution, not a solution imposed from the outside. During this meeting, we will not discuss the names of candidates for leadership positions in the unified executive authority, and I will not accept that the Mission plays any role in naming the executive authority as promoted by some. This is a Libyan decision; a Libyan-Libyan solution, a purely Libyan solution. I invite you to come up with creative recommendations to be presented to  the LPDF for consensus. The LPDF is the owner of the inherent right to bring the political process to its goal.

Reaching a broad agreement among this Committee’s members to produce specific recommendations would ensure moving forward with presenting these recommendations to the LPDF to implement.

Will of all Libyan regions needs to be represented

During our previous meeting, it was clear through the proposals that the principles and goals of the Advisory Committee’s members revolve around a national solution, which builds on what was agreed upon in the Roadmap and provides reassurances to all; a solution that takes into account that the will of all Libyan regions is represented.

Once again, I reiterate that it’s very important that the Committee avoids the code of conduct violations that negatively affected the work of the LPDF.

I would also like to point out that the LPDF established three Committees only, the Drafting Committees [established during the meetings] in Tunis, the Legal Committee that is holding a virtual meeting as we speak, and this Advisory Committee. The rumours spreading around the establishment of a Settlement Committee, has nothing to do with the United Nations.

We hope that your work is characterized by the spirit of cooperation, desire for joint work, and the endeavour to reach consensual proposals, a spirit similar to the spirit that prevailed during the first and second sessions of the Committee. I wish you success in your work.

Without unified Libyan executive it is difficult to implement reunified budget

We are here to help. We have 4 days, four very important days for your country. So, let us work in a spirit of seriousness because we want to return to the LPDF with positive, concrete recommendations, because, in fact, I see many positive developments in the country. I was participating in the economic meeting, the economic dialogue last week, on the unification of the budget for the country, this is an excellent step, but it is clear that without a unified executive authority, it is difficult to implement this budget across the country. This is a simple indication, not to mention the need to provide services to municipalities, and the difficult circumstances due to the COVID-19 pandemic.

A lot of work should be dealt with by a unified government.

I am also concerned about the problem of the deteriorating infrastructure, such as the electrical grid. I hear and see that there is a major power cut in Tripoli. There are a lot of work that should be dealt with by a unified government. Let us work in this spirit and think about average Libyans who are living in these difficult conditions.’’