Home / Normal / Mapping of 5,000 air and artillery strikes in Libya since 2012 published 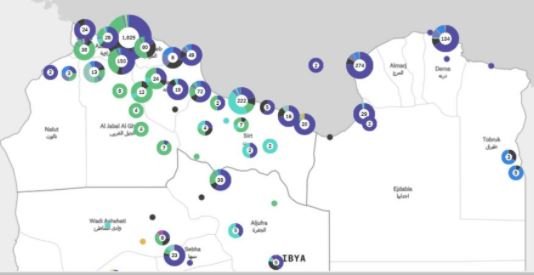 Mapping of 5,000 air and artillery strikes in Libya since 2012 published

NGO Airwars has yesterday released comprehensive mapping of more than 5,000 air and artillery strikes in Libya since 2012.

Airwars said the new data covers all known locally-reported strikes to date, conducted by all parties to an on-and-off civil war that is currently on pause, after last year’s UN-brokered ceasefire deal.

It reported that the location of every claimed strike event in as much detail as possible has been researched for several months, placing the majority at least to neighbourhood level, and with many civilian harm events now including more exact locations.

The new strike data joins more than 230 reported civilian harm events in Libya since 2012 which are already published by Airwars.

The new maps visualise these incidents by civilian fatalities, militant fatalities, and strikes carried out by each belligerent. The maps are navigable by a histogram of the map data over time, to try to provide an overview of a particularly complex conflict.

It says the new interactive map enables users to explore the conflict in Libya and its impact on different regions of the country. Filters make it possible to see which faction bombed how much in which region; and who caused the most reported harm to civilians – revealing a clear correlation between the use of explosive weapons in urban areas and non-combatant deaths.

According to Airwars modelling of local claims, the Libya conflict from 2012 to date has claimed the lives of up to 1,100 civilians through air and artillery strikes. Additionally, the map also depicts claimed deaths among militant groups.

As a timeline above the mapping shows, Libya has witnessed intense periods of fighting since 2012 – with the LNA’s offensive on Tripoli between April 2019 and June 2020 by far the heaviest.

Clicking on the map reveals more detail about individual events, such as the suspected or known belligerent and any associated deaths. Civilian casualty incidents are also linked to the Airwars database, where more granular analysis can be found.