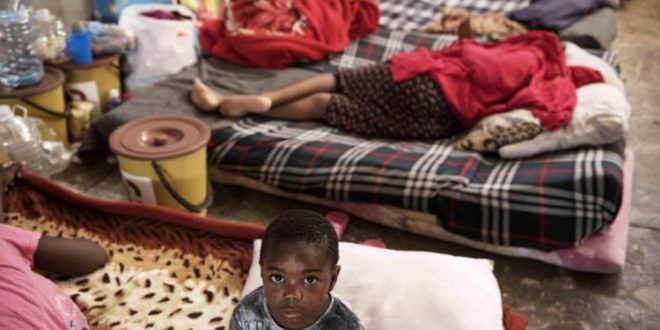 In a meeting between German Ambassador to Libya Oliver Owcza discussed Libya’s immigration issue with the Head of the Directorate for Combatting Illegal Migration (DCIM), General Al-Mabrouk Abdel-Hafiz, Owcaza expressed his country’s support for the closure of migrant centres along the coast.

“In an open and frank discussion with General Mabrouk, Head of DCIM, we welcomed progress in the closure of detention centres along the coast,” Owcza stated, “We likewise discussed the need for durable, rights-based solutions for refugees and migrants and offered continued support.”

“Libya is no longer a transit country, but rather a victim left alone to face a crisis that the countries of the world failed,” Al-Mabrouk strongly stated.

The DCIM said in a statement that the meeting was held in its headquarters with the aim of tackling several pressing matters regarding the growing issue of illegal immigration through Libya.

“We also reviewed Germany’s contribution to combating this phenomenon, which has become a major source of concern for the Mediterranean region,” the DCIM added.

Libya’s detention centres have been a cause for international controversy since their inception, with human rights organizations and foreign governments alike consistently calling for their closure and establishment of a better, more humane solution to Libya’s growing migrant issue.

“I renew my appeal to the Libyan authorities … to fulfil their obligations under international law and to close all detention centres, in close coordination with United Nations entities,” UN Secretary-General Antonio Guterres stated in late 2020

“Nothing can justify the horrendous conditions under which refugees and migrants are detained in Libya,” He added.

The United Nations High Commissioner for Refugees (UNHCR) continues to reiterate that it is against human rights laws to return migrants to Libya.

Since the eruption of the chaos that followed the 17 of February revolution in 2011, Libya has become a point of departure for thousands of migrants attempting to escape Africa and cross the Mediterranean to reach Europe.