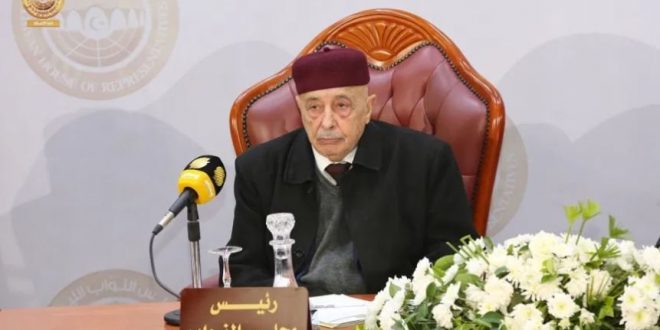 The Speaker of the Libyan House of Representatives (HoR) in Tobruk, Aqila Saleh, called for a consultation session in the city to discuss granting confidence to the national unity government that would be formed in a few days by the interim prime minister, Abdul-Hamid Dbeibah.

Saleh told Khalifa Haftar sons’ Al-Hadath TV channel that one of the conditions for granting confidence to the interim government is the attendance of all HoR members, adding that official HoR meetings would be convened in Benghazi only.

He also said the new Presidential Council and government should be based in Sirte and work under the protection of the armed forces (Khalifa Haftar’s forces) and under the supervision of the Libyan 5+5 Joint Military Commission.

Saleh hinted at rejecting any HoR meeting outside Tobruk or Benghazi even if the meeting had a full quorum, reiterating the need to preserve regions’ rights in ministerial portfolios and saying he wouldn’t accept to see the new government based in Tripoli until the capital is “cleansed and secure”.

He also said that the member of the HoR, Abu Bakr Baira, who said on Al-Hadath TV he would back holding a full-quorum session via Zoom, was trying to take sides because he never forgot that he lost HoR Speaker’s seat back in 2014.