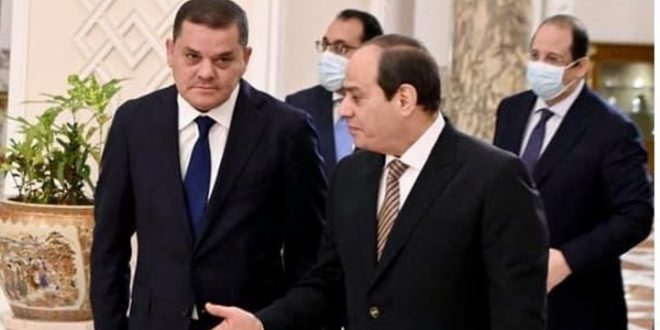 Sisi said Egypt “backs the Libyan people” in their quest for stability to end more than a decade of conflict, Egyptian presidency spokesman Bassam Rady said in a statement.

Egypt was ready to share its “expertise with its Libyan brothers”, he said without elaborating.

Libya’s Abdul Hamid Dbeibah was in Cairo on his first official visit abroad since he was selected at UN-led talks earlier this month as prime minister, part of an interim executive to lead Libya until December elections.

Libya has been riven by violence since a 2011 NATO-backed uprising that toppled and killed dictator Muammar Gaddafi.

Two rival administrations have vied for control of the oil-rich country for years.

The Tripoli-based Government of National Accord, supported by Turkey, is pitted against forces loyal to eastern-based strongman Khalifa Haftar, backed by Egypt, Russia and the United Arab Emirates.

In December, however, Egyptian security officials met GNA representatives in Tripoli, the first such high-level delegation of its kind to travel to the Libyan capital in nearly six years.

The talks covered ways of boosting security cooperation and support for a fragile ceasefire signed in October, Libyan officials said at the time.

After his appointment, Dbeibah, a 61-year-old engineer, has called for the reconstruction of Libya, to establish democracy and reunited the divided North African country.