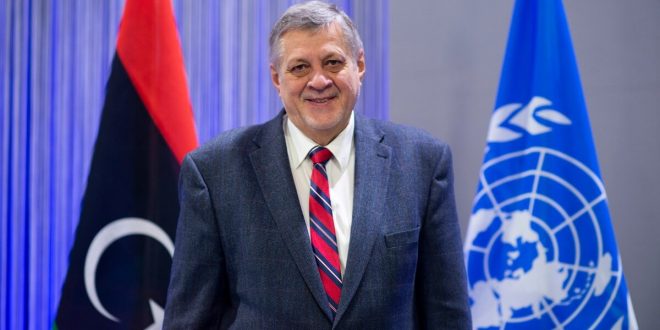 The UN special envoy to Libya on Friday met with east-based Libyan strongman Khalifa Haftar as part of efforts to unite rival factions in the war-torn North African nation ahead of elections in December.

During their meeting in the eastern city of Benghazi, UN envoy Jan Kubis and Haftar agreed on the importance for all Libyan parties to commit to and facilitate the Dec. 24 balloting, according to a statement for the UN mission in Libya.

The elections were laid out under a UN-backed political roadmap for the fractured country.

Kubis’ visit follows a key development earlier this month at UN-backed talks in Switzerland, when Libyan delegates chose a transitional government, with a prime minister and a three-member presidential council, meant to lead Libya through the elections. The election was a major step toward unifying Libya and ending one of the most intractable conflicts left behind by the Arab Spring.

For years, Haftar has been a controversial figure. In 2019, he launched an offensive to capture the capital, Tripoli, a campaign that ultimately failed the following year.

Kubis and Haftar also discussed ways to expedite the implementation of a cease-fire agreement signed last year and the withdrawal of all foreign forces and mercenaries. According to the UN mission’s statement, they also discussed the opening of a key Libyan artery – the coastal road along the Mediterranean Sea that links Tripoli, to the west, with Benghazi.

Since 2015, Libya has been divided between two rival administrations: a UN-backed, but weak government in Tripoli – a city largely controlled by an array of armed factions – and an eastern-based government backed Haftar. Each is backed by different foreign governments.

This is Kubis’ first visit to Libya since his appointment to the post in January. Earlier, the former Slovak foreign minister served as UN envoy to Lebanon. A day before meeting Haftar, Kubis held talks in Tripoli with the president of the newly elected, three-member presidential council, Mohamed Menefi, and other Libyan politicians.

Libya descended into chaos after the ouster of longtime dictator Muammar Gaddafi in 2011. It has since also become a haven for Islamic militants and armed groups that survive on looting and human trafficking.