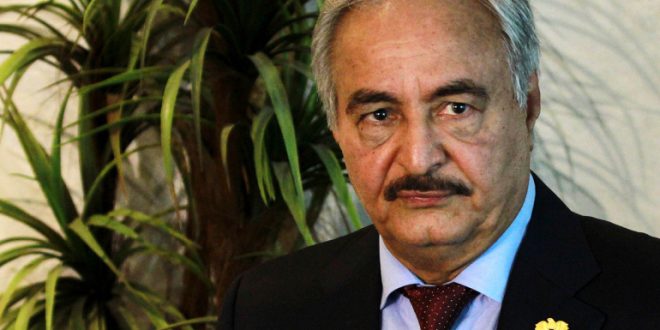 British citizens, including a Dubai-based businesswoman, were involved in a failed attempt to provide support to Libyan military commander Khalifa Haftar, a UN investigation has found.

Amanda Kate Perry, co-manager of Opus Capital Management, was listed alongside two former Royal Marines as part of Project Opus, an attempt by private security contractor Erik Prince to deploy a force of foreign mercenaries and weapons in 2019 to strongman Khalifa Haftar, who has fought to overthrow the UN-backed Libyan government.

Middle East Eye has contacted Perry for comment but has not received a response.

In a report detailed by US media on Friday, UN investigators said Prince – an ally of former US President Trump – had violated a UN embargo on Libya for the $80m operation, which included plans to form a hit squad to track and kill Libyan commanders opposed to Haftar, including some who were also European Union citizens.

The plot failed after promised equipment failed to materialise and the group was forced to make a night-time evacuation.

According to details from the report in The Times, Opus Capital Management coordinated the operation. Documents in the report noted that the company said attempts to buy “air ammunition, ground weapons, ground ammunition and night vision” equipment was blocked by the government of Jordan.

The Times said it was unable to reach Perry for comment.

Perry declined to comment to the New York Times when asked about her alleged role in the operation in a story published in May 2020.

Prince, a former Navy SEAL and the brother of Trump’s education secretary Betsy DeVos, gained infamy as the head of the Blackwater private security firm, whose contractors were accused of killing unarmed Iraqi civilians in Baghdad in 2007.

The accusation exposes Prince to possible UN sanctions, including a travel ban, the Times said.

Prince did not cooperate with the UN inquiry and his lawyer declined to comment to the New York Times, it added.

An AFP request for comment to the Hong Kong-based Frontier Services Group, for which Prince is a board member and deputy chairman, went unanswered.

Oil-rich Libya has been torn by civil war since a Nato-backed uprising led to the toppling and killing of dictator Muammar Gaddafi in 2011.

The country has in recent years been split between a Government of National Accord (GNA) in Tripoli, and an eastern-based administration, backed by Haftar, who has faced charges of war crimes.

In 2019, Trump praised the strongman for his role in “fighting terrorism” in Libya.

A new interim executive for the country was chosen on 5 February by the Libyan Political Dialogue Forum in Switzerland, comprising 75 participants selected by the UN to represent a broad cross-section of society.

Haftar has pledged his support for the initiative.