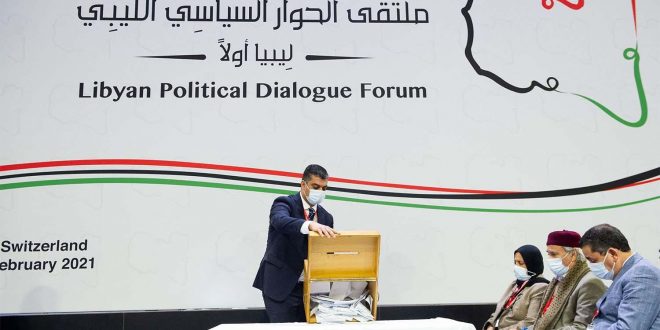 UNSMIL today said that it is unable to comment on the alleged bribery allegations.

The comment comes in reaction to an unpublished UN expert panel report cited by media sources alleging bribery in the hundreds of thousands of dollars. The allegations involve the prime minister designate of the Government of National Unity, Abd Alhamid Aldabaiba.

He stressed the integrity of the LPDF process by which he was chosen, which he said took place with complete transparency, and which the Libyans witnessed through different television and the media.

The allegations have caused consternation in Libya with many calling for the planned 8 March reunified House of Representatives session to be delayed until the bribery report is published.

In its statement, UNSMIL said ‘‘With regard to media reports circulated about allegations of bribery during the Libyan Political Dialogue Forum (LPDF) in Tunisia, citing a “UN expert panel report,” UNSMIL reiterates that the Panel of Experts (PoE) is a separate entity, completely independent from UNSMIL.

The PoE provides its report to the Security Council Sanctions Committee. The Mission further stresses that it does not receive the reports of the PoE including its latest report, and it is therefore not in a position to comment on it. Any questions in this regard should be addressed to the Sanctions Committee’’.

The show must go on..

UNSMIL went on to say that it took ‘‘note of ongoing preparations to convene the House of Representatives (HoR) in the city of Sirte, scheduled to be held on 8 March.

Following consultations with international partners, UNSMIL and its partners strongly encourage the HoR to meet as scheduled to discuss and consider the vote of confidence to the Cabinet to be proposed by the Prime-Minister designate. They encourage the PM-designate to present the line-up of the government without further delay.

This call comes in line with the increasing public demand for the urgent need to form a unified government to address the most pressing needs and facilitate the holding of national elections in December 2021’’.