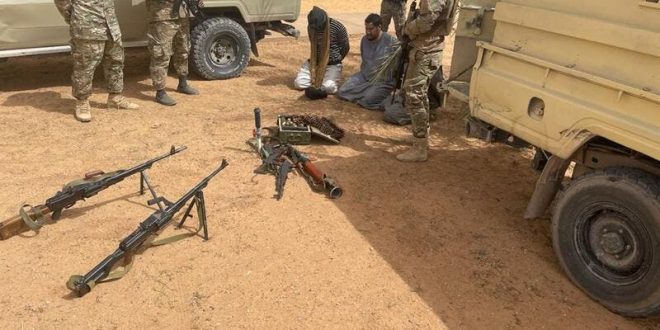 The eastern-based marshal’s forces led an operation in the southern desert town of Ubari targeting the “most prominent leader” of IS in Libya, Mohamed Miloud Mohamed – who goes by Abu Omar – leading to his arrest, said a statement by Haftar’s spokesman Ahmad al-Mesmari.

Abu Omar was among the top IS leaders in Libya when the group took control of the central coastal city of Sirte in 2015, the statement added.

The jihadists made Sirte a stronghold where they trained fighters and orchestrated attacks, including killing scores of foreign tourists in neighbouring Tunisia, before they were driven out of the Libyan city in 2016.

IS gained a foothold in Libya amid the chaos that reigned in the country after dictator Moamer Kadhafi was toppled and killed in a NATO-backed uprising in 2011.

Described as a “dangerous terrorist”, Abu Omar had “close ties” with Abu Moaz al-Iraqi, the head of IS in Libya, who was killed last September by pro-Haftar forces, Mesmari’s statement said.

Abu Omar is also accused of having abducted in 2015 four Italian engineers, who were freed after payment of a ransom estimated at four million euros ($4.8 million), it added.

A political crisis in the wake of Kadhafi’s overthrow saw the oil-rich country split between rival authorities in the east and west and the disintegration of security apparatuses, creating fertile ground for jihadist groups like IS to take root.

After IS was ousted from Sirte the group was significantly weakened in Libya, but its members have retreated into the desert or blended in with the population on the Mediterranean coast.

A new transitional government was recently approved under a UN-sponsored inter-Libyan dialogue to unify the country’s institutions and is due to be sworn in on Monday.