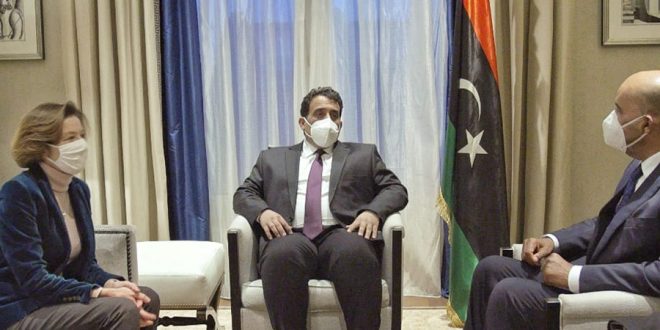 The Head of the Libyan Presidential Council, Mohammed Menfi, and his deputy Mossa Al-Koni discussed with the Feench Defense Minister, Florence Parly, cooperation in securing the southern and maritime borders of Libya, and fighting illegal immigration via the country, according to the media office of Menfi.

The media office added that the French Defense Minister welcomed assisting Libya to pass this difficult period and reiterated support for the new executive authority in the country.

On Tuesday, Menfi and Al-Koni arrived in Paris and met with the French President Emmanuel Macron, who announced in a press conference the reopening of his country’s embassy in Tripoli next Monday and urged for the departure of foreign forces from Libya.

Al-Koni later indicated that Macron had vowed to work on French training programs for Libyan border security forces, especially in the south, adding that this issue was the subject of a long conversation with Macron, in addition to illegal immigration as well as terrorism and crime that use immigration as a tool, saying they had reiterated the need for Chad and Niger’s assistance to secure the Libyan borders.

Al-Koni indicated that Macron had promised to install border patrols, especially in the desert areas after training and equipping them by France.