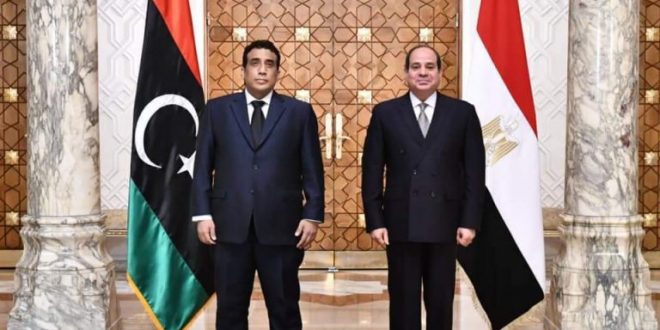 The Egyptian President Abdel Fattah El Sisi reiterated Thursday Cairo’s full support for the new executive authority in Libya in all fields at bilateral, regional and international circles, saying it is important to have mutual coordination at this stage.

The spokesman for the Egyptian Presidency, Bassam Radi, said in a statement that El Sisi told Menfi that Egypt was reassured that the GNU would take up the responsibility to lead Libya through this interim period and achieve reconciliation among Libyan societies, in addition to unifying state institutions and then holding general elections on time next December.

El Sisi said the work of the GNU would be significant to lead Libya to a new status quo and a lasting stable political system based on the will of the people, adding that Egypt aims to help Libya achieve its own interests and preserve its sovereignty as well as regain stability with a unified army and an end to the presence of foreign mercenaries and fighters on its territory.

He indicated that Egypt is ready to provide expertise to the Libyan GNU in all fields and assist the national institutions such as security and police to achieve stability and security in the country.