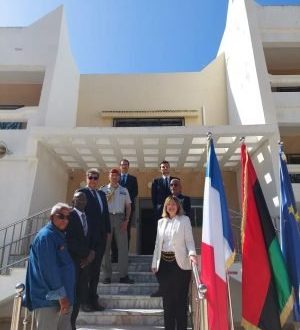 As promised by French President Emmanuel Macron on 23 March during the visit to Paris by Libya’s Presidency Council head Mohamed Menfi and his Deputy Musa Koni, the French embassy in Tripoli reopened today.

Speaking to the Libyan state news agency, French ambassador Béatrice le Fraper du Hellen, said today, “I arrived in Tripoli to reopen the French embassy in Libya, and I am determined to work with all strength to strengthen relations with the Libyan authorities and the Libyan people who hosted me.”

During his meeting in Paris with Libya’s Presidency Council head Mohamed Menfi and his Deputy Musa Koni, French President Emmanuel Macron had said: