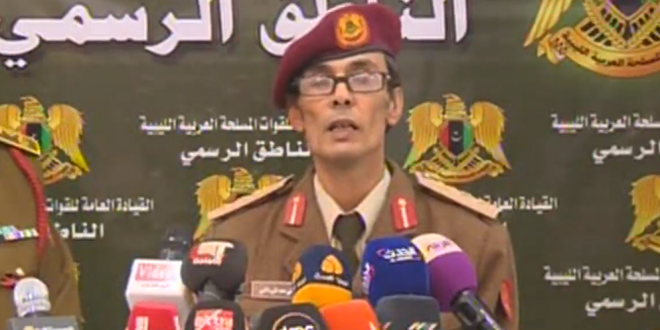 Head of military prosecution in Benghazi dismissed after Al-Werfalli remarks

The Military Prosecutor of Khalifa Haftar’s General Command, Faraj Al-Sosaa, dismissed the Head of Military Prosecution, Colonel Ali Madi, from his position after he had described the assassinated killer, Mahmoud Al-Werfalli, who was wanted for war crimes by the International Criminal Court, as “partially mentally ill‘.

The Military Prosecutor said the dismissal was based on Madi’s violation that was represented on false statements about the health conditions of the senior leader of Al-Saiqa Force, Al-Werfalli, who was murdered last week.

Madi held a press conference last Saturday in Benghazi and said Al-Werfalli was suffering from a mental disorder and he was lodged at a psychiatric hospital before he was gunned down.

Madi pointed fingers at some parties, which he didn’t name, saying they were trying to destabilize Benghazi. He also said Al-Werfalli was sent to a psychiatrist by the military prosecution following his case of extrajudicial executions.