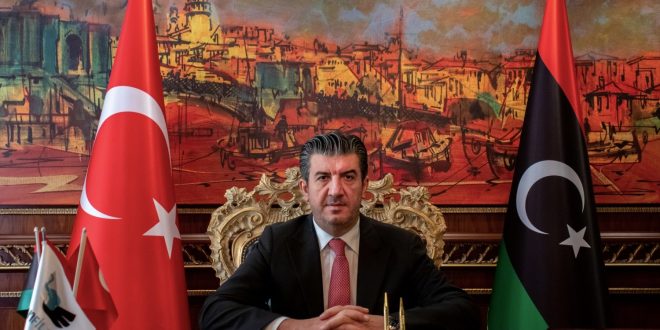 Murtaza Karanfil, chairman of the Turkey-Libya Business Council of the Council on Foreign Economic Relations (DEIK), stated that the blockage this week of the Suez Canal once again revealed the importance of Libya in terms of Turkey’s exports to Africa.

Speaking to Turkish publication Milliyet.com, the founder and chairman of Karanfil Group said that “thanks to the logistics base to be established in Libya, we will provide direct access to the middle of Africa.”

He emphasized that after the Suez blockage, Libya’s importance, especially for Turkey’s trade and exports, was once again understood.

He emphasized that after the Suez blockage, Libya’s importance, especially for Turkey’s trade and exports, was once again understood.

“The trade route to East and Central Africa passes through the Suez Canal. Products are delivered to Central Africa and Chad via Djibouti port. This takes 45 days from the Mediterranean to the Suez Canal. Thanks to the logistics base to be established in Libya, we will provide direct access to the middle of Africa. Maybe we’ll use the road there, but ships that already want to reach Central Africa are using the land route.

The logistics base in Libya will also provide an alternative from Africa towards the interior. Libya will provide significant advantages in access to both East and West Africa, especially Central Africa. Transportation times of up to 45 days are reduced to 10-15 days. Libya is a 3-day drive from the Mediterranean Sea. From here we can reach both East and West Africa in 7-10 days by land. The logistics base in Libya relieves this burden at very attractive costs.”

Things looking up in Libya

Karanfil said that the government in Libya received a vote of confidence last week, that budget negotiations would be approved, and that economic development activity would begin quickly, adding that both Libyan and Turkish businesspeople were hopeful of the new process and that the Libyan people would not allow an attempt to disrupt this process.

Logistics base in Misrata started

Karanfil noted that negotiations for air cargo were continuing. “We reach the point we want in Africa in 1-2 days with air cargo. In other words, a product departing from Turkey will reach Africa by sea in 3 days. From here, it can be delivered in 1-2 days, wherever it is in Africa. This will make a great contribution to our exporters.”