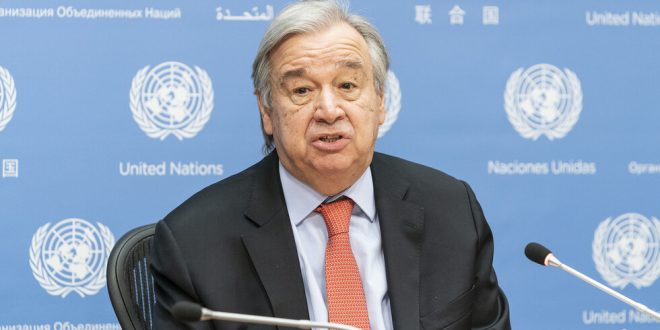 UN Secretary General Antonio Guterres recommended in a report released Wednesday establishing a “monitoring component” for the UN mission in Libya working alongside a ceasefire monitoring mechanism run by Libyans.

Libya has been ravaged by bloodshed since the fall and killing of dictator Moammar Ghaddafi in a NATO-backed 2011 revolt.

An array of armed groups arose to fill the vacuum, and many coalesced around a unity government or around eastern military strongman Khalifa Haftar.

The two camps, each supported by foreign powers, fought for more than a year before Haftar was forced to retreat.

In October they signed a truce, setting in motion a UN-led process that saw a new transitional government installed in February.

Guterres, in the report presented to the Security Council, did not say how many UN observers would be needed for the UN mission known as UNSMIL.

“I call upon the Security Council to give UNSMIL a clear but flexible mandate, supported by additional resources, to enable the United Nations to fully support the deployment of UNSMIL monitors to Libya who would eventually operate in and around Sirte and other areas if required,” Guterres said.

“The role of UNSMIL monitors would be limited to the monitoring of violations of the ceasefire agreement reported by the national monitors and other local sources,” the secretary general said.

He added: “The task would imply the participation of UNSMIL monitors in ground monitoring missions in the designated area.”

He insisted that the Libyan parties must commit to protecting UN personnel, equipment and facilities.

Guterres did not say how many UN staffers might be made available to the Libyan-directed ceasefire monitoring team. Diplomats said it could be as few as five.