Home / Normal / Debaiba & Draghi hold a joint press conference, agree to strengthen relations between Italy and Libya in the future 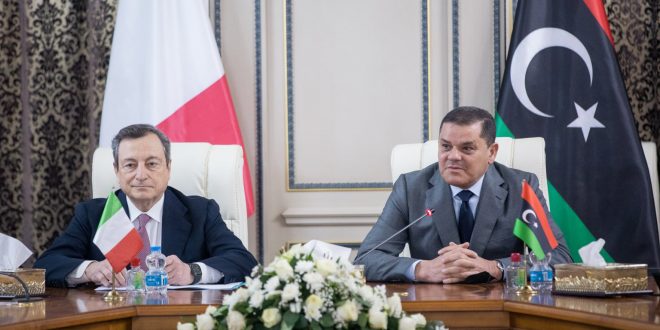 Debaiba & Draghi hold a joint press conference, agree to strengthen relations between Italy and Libya in the future

Libya’s Prime Minister today received his Italian counterpart Mario Draghi in what is the Italian Premier’s first trip outside Italy. Draghi and his delegation were welcomed at the headquarters of the Government in Tripoli.

A joint press conference was soon held after a meeting between Draghi and Debaiba to discuss matters of mutual interest to Libya and Italy such as illegal migration, international trade, infrastructure and reconstruction.

On his part, Libya’s Prime Minister welcomed the visit of his Italian counterpart and stressed the importance of supporting Italy in combatting illegal migration and expressed his government’s appreciation for the continued work in the Italian embassy in Libya despite the country’s difficult circumstances.

The Libyan PM extended his gratitude for Italy’s commitment to supporting Libya’s stability and continued prosperity, noting that an agreement had been reached with his Italian counterpart to support Libya’s reconstruction, infrastructure and health sector.

Debaiba also added that the implementation of the treaty signed between Italy and Libya in 2008 is one of the most important things, to begin with.

On this end, the Italian Primer stated that his visit to Libya as his first international trip is proof of the importance of the historical relationship between the two countries.

“For Libya to be able to proceed with courage and decisiveness it is a prerequisite that the ceasefire must continue and be strictly observed,” Draghi, reiterating the EU’s support of the ceasefire agreement and the removal of all foreign forces from Libya.

“It is a historic and unique moment to strengthen relations with the Government of National Unity, which has been recognized by Parliament, and is bringing Libya closer towards national reconciliation,” Draghi said.

He also added that Italy had given a financial incentive to the Italian Cultural Institute in Libya to increase scholarships for Libyan students studying in Italy and expanding bilateral cooperation to the highest levels.

Dragie noted that in terms of the growing issue of illegal migration, the issue isn’t limited to the maritime border only but also extends to the southern border and that the GNU and Italy should work in tandem to combat the increasing phenomenon.

The Italian PM is expected to also meet with his Greek counterpart Kyriakos Mitsotakis who is also expected to arrive this week on his visit to Libya to restore international relations between Athens and Tripoli.

The views expressed in Op-Ed pieces are those of the author and do not purport to reflect the opinions or views of Libyan Express.
How to submit an Op-Ed: Libyan Express accepts opinion articles on a wide range of topics. Submissions may be sent to [email protected] Please include ‘Op-Ed’ in the subject line.

International Relations and Cooperation
All
2021-04-06
asaeid
Previous U.S. pushing for constitutionally based Libyan elections on 24 December, LPDF to override HoR if it fails to prepare legal basis
Next Crisis in Libya over distribution of sovereign positions