Home / Normal / U.S. pushing for constitutionally based Libyan elections on 24 December, LPDF to override HoR if it fails to prepare legal basis 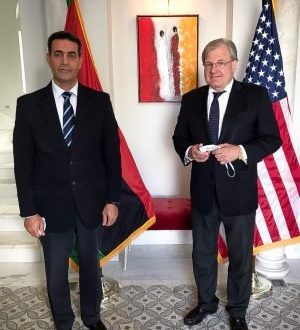 U.S. pushing for constitutionally based Libyan elections on 24 December, LPDF to override HoR if it fails to prepare legal basis

The embassy said Norland received an update on planning for Libya’s national elections on 24 December 2021. Norland congratulated Al-Sayah on preparations completed so far, and on the highly competent, independent and apolitical way in which HNEC has carried out its technical tasks in preparation for this historic event in Libya’s political life.

Ambassador Norland stressed the importance the United States attaches to reaching agreement on a viable constitutional basis and on presidential and parliamentary election laws by July 1, 2021, in order for the HNEC to adequately prepare for the December 2021 elections.

In the U.S. view, the statement reported, if the House of Representatives is unable to reach consensus on these issues, the LPDF must fulfil its role according to the roadmap so that elections can take place by the LPDF’s agreed-upon 24 December 2021 electoral timeline.

Ambassador Norland and Al-Sayah discussed the importance of electoral security, space for civil society to engage in voter education activities, and for candidates to be able to campaign freely.

The United States, the statement added, supports full participation by all eligible voters — men and women, the disabled, and members of minority groups alike. The United States appreciates its partnership with the HNEC – an independent and capable institution – as it prepares to administer free, fair and transparent elections for the people of Libya. The Ambassador complimented Al-Sayah’s capable work in the years he has served as the HNEC’s head, the statement concluded.

Electoral ProcessInternational Relations and CooperationPolitical Transition
All
2021-04-06
asaeid
Previous EU Migration Pact reflects a shared commitment to refugees: keeping them out at all costs
Next Debaiba & Draghi hold a joint press conference, agree to strengthen relations between Italy and Libya in the future