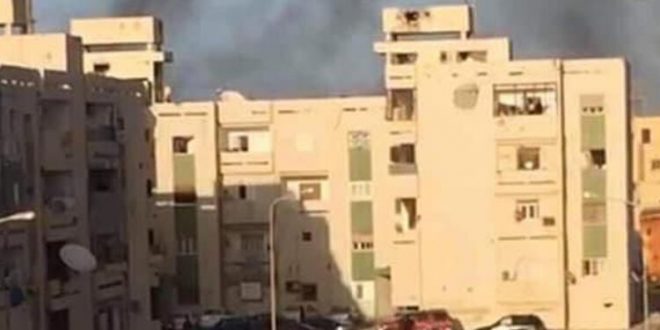 One killed and four injured in violent clashes in Sirte

According to the official spokesman of Sirte Al Jafra Operations Room, Brigadier General Abdul Hadi Darrah announced that one person was killed and 4 others were wounded during violent clashes in Sirte.

In a statement to the news channels, Darrah explained that the 166th Battalion loyal to field marshal Khalifa Haftar had launched an attack on a place where a number of “Kanyat” elements and members of the Warshafana area gathered, leading to clashes with light and medium weapons.

The spokesman added that the situation inside Sirte City remained precarious and that the area had been blockaded by military police, 128th Battalion and 166th Battalion, while the Ibn Sina Hospital in the city had been closed.

Operation Burkan Alghadab (Vulcano of Rage) had published a video from Sirte, showing part of the light and medium-weapons clashes between Haftar’s forces inside the city’s No. 2 neighbourhood.

The Operation also shared pictures that were yesterday of Haftar’s son in Sirte with a number of wanted criminals, most notably Nasser Al-Mahalel and Hassan Al-Zadamah.

Hassan Al-Zadma has been named in more than one report of UN Security Council experts in connection to bringing foreign mercenaries into Libya.

Al-Zadma is reportedly involved in bringing in an estimated 2200 Sudanese fighters. Their core functions include: Guarding infrastructure and protecting supply lines and some cities in the Libyan south.

Wanted Criminal Nasser Al-Mahalel the prominent official of the Wahhabi Al-Quds organization in Libya, in direct association with the Saudi Intelligence Service from the population of neighborhood No. 3, was the associate of the order of the 604th Terrorist Battalion. A famous incident revolved around his escape, dressed as a woman and Khammar during ISIS control of his city.