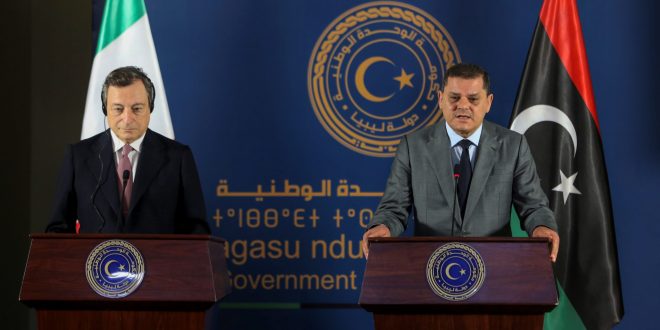 On April 6, Italian Prime Minister Mario Draghi met with his Libyan counterpart Abdulhamid Dbeibah in Tripoli. It was the Italian prime minister’s first state visit since taking office on February 13. More significantly, the visit has come at a time when Libya is entering a new phase of political transition.

The Italian prime minister’s visit, albeit brief, focused on several important issues. He stressed that this is a unique moment for the two countries “to rebuild an ancient friendship,” referring to the long-lasting economic and political collaboration that Italy and Libya have shared over the years. PM Draghi showed much enthusiasm to start a new “future” and to do so “quickly,” adding that the 2020 ceasefire must be “strictly observed.”

The two countries share many common interests, which were discussed during the visit. Most notably, Italy’s oil giant, Eni, holds strategic investments in Libya (in 2019, Italy exported 8 percent of its natural gas from Libya). It is to no surprise, then, that Draghi spoke about intensifying collaboration with Libya in the electrical and energy sectors. Immigration, another key interest, was also touched upon when Draghi mentioned that he greatly appreciated Libya’s efforts to save migrants at sea and combat human smuggling—statements he was heavily criticized for given the perilous and dire state of Libya’s detention camps.

Regardless, collaboration between the two countries will likely move beyond what was said in public by the two leaders. In fact, many believe that Italy will take the lead in rebuilding Tripoli’s airport, a project that was commissioned to Italian construction company Aeneas three years ago. It is also rumored that Italy will take over the construction of a long highway along Libya’s Mediterranean coast, which would connect Tunisia to Egypt through Libya.

Draghi’s visit to Libya is a big step for renewing Italy’s role in Libya and the wider Mediterranean, one that should not be overlooked. Italy may well be paving the way to becoming an important actor in managing crises and challenges in the region. In fact, two weeks before Draghi’s trip on March 21, 2021, Italy’s Foreign Minister Luigi Di Maio met with Dbeibah, Libyan Presidential Council’s vice presidents Musa al-Koni and Abdullah al-Lafi, and Foreign Minister Najla el-Mangoush. During his visit, Di Maio spoke about the “important geostrategic interests” that the two countries share and highlighted Italy’s intent to help stabilize the country. It’s worth noting that Di Maio was the first European Union minister to visit the newly elected Libyan Prime Minister. The readiness with which Di Maio took the opportunity to visit the country was already a strong signal that Italy is ready to become a strategic partner in the region—one that was further confirmed by Draghi’s visit.

Italy has many reasons to be a vital partner for Libya and other countries in the region. For one, Italy and Libya share historic ties that date back to 1911, when Italy first occupied Tripolitania and Cyrenaica—two regions that later became known as Libya. Over the decades, Italian-Libyan relations have seen low and high points. Of note was the 2008 signing of the Treaty of Benghazi between then-Prime Minister Silvio Berlusconi and Dictator Muammar Qaddafi, an agreement which placed Italy as a solid and credible partner for Libya.

Italy is also one of the only countries to maintain a strong presence on the ground even before the ousting of Qaddafi, but especially in the last few years during the civil war’s intensification. In fact, Italy never closed its embassy in Tripoli, whereas many other countries—including France and the United States—did. The fact that Italy maintained an ambassador in Libya over the years provides the country with strong ties to local institutions—ties that allow the Italians to place themselves at the forefront of a potential renewed European partnership with Libya.

Finally, Italy now has stronger credibility thanks to Draghi’s appointment as Italy’s new prime minister. His track record as a trustworthy politician derives from his long and successful career at top international institutions in Europe, most notably as head of the European Central Bank between 2011 and 2019. This renewed credibility places Italy in a strategic position in Europe to become the new point of reference for the US when dealing with Libya and other countries in the Mediterranean. At a time when Germany’s Angela Merkel is stepping down and France’s Emmanuel Macron faces an important electoral campaign, Italy is best suited to take the lead in strengthening transatlantic cooperation in the Mediterranean.

However, the road ahead is complicated. Italy must now act decisively to determine its foreign policy strategy and coordinate with its American and European allies. With the Joe Biden administration turning towards the east, Italy can play the role of intermediary in Libya—a strategy which Washington may be eager to welcome, as evidenced by Secretary of State Antony Blinken’s remarks upon meeting his Italian counterpart on April 13. If Italy were to strategically place itself as a broker for its allies, it could finally become a key player and help restore stability and security in Libya—and perhaps the wider Mediterranean.