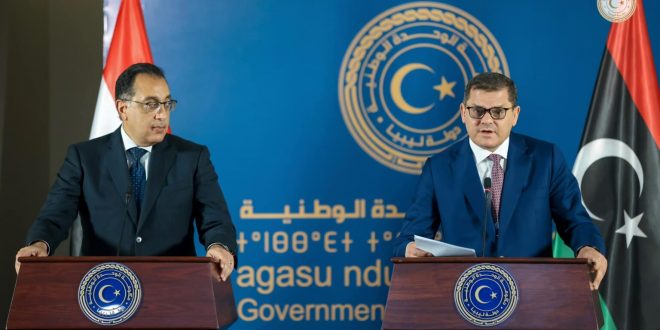 Egyptian Prime Minister Mostafa Madbouli met his counterpart Abdulhamid Dbeibah in the Libyan capital on Tuesday, in a new sign of warming ties between Tripoli and Cairo.

Officials from the two countries signed memorandums of understanding on electricity and telecommunications, the Libyan government said, and planned for a resumption of air links operated by the North African neighbours’ national carriers.

Oil-rich Libya has been torn by conflict since the toppling and killing of dictator Muammar Qaddafi a decade ago.

The country had been divided between two rival administrations: the UN-recognised Government of National Accord based in Tripoli, and its rival in the east, loyal to military strongman Khalifa Haftar.

Fighting only came to a halt last summer, and a formal ceasefire in October was followed by the establishment of a new unity government led by Dbeibah ahead of elections planned for December.

Egypt had long been considered one of Haftar’s main supporters, but has appeared to shift its position since late last year.

Madbouli’s trip, at the head of a delegation of 11 ministers, was the first such visit to Tripoli since the installation of Libya’s interim government last month.

Dbeibah visited Egypt in February on his first official trip abroad after he was selected as premier at UN-led talks earlier in the month.