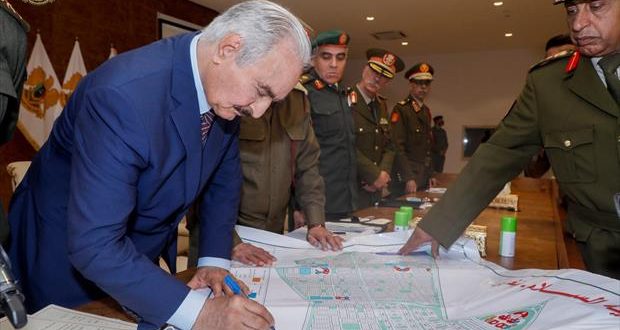 Self-styled Field Marshal Khalifa Haftar is a serious hurdle facing the Government of National Unity (GNU). He could prove to be a more complex issue than initially expected, taking time and patience to resolve. It is misleading to assume that dealing with Haftar is an easy political-military issue. How he is handled could also define the relationship between any civilian government and the military establishment in the new Libya.

He has played a continuous role in the Libyan conflict since he first appeared on the scene in May 2014. Between 2015 and 2019, he rose to prominence thanks to, among other things, foreign support.

Countries like Egypt, Libya’s eastern neighbour, supported Haftar and his self-styled Libyan National Army (LNA), believing that he could deliver security in the face of increased terror threats to Egypt. The security-focused Egyptian regime considered that Haftar could be trusted with border security to counter arms trafficking and the movement of suspected terrorists across the borders.

The United Arab Emirates (UAE) and Russia offered help to the septuagenarian general as he represented an opportunity to access Libya for their long-term strategies. France helped Haftar, in part, to counter Russia and Turkey and access Libya’s vast oil resources, of which Haftar used to control a large portion.

For the general, being on the ground in Libya, and even nurturing the hope of ruling the country, is a long overdue and deserved ambition. Having spent the best part of his life in exile, after disputes with his former boss, the late Colonel Muammar Gaddafi, Haftar believes that he has the right to run Libya and enjoy some of its vast wealth.

Despite the losses and the defeat that he suffered last year while attempting to take Tripoli by force, Haftar is not yet out of the power game in the war-ravaged country. He is down, but not yet out.

Yet, not much can be achieved without him in terms of a ceasefire and a political agreement, but counting on him is also a problem since he is controlled by external powers that support him.

But after the GNU took over, all of this seems to be changing. So far, the relationship between Haftar and the GNU is one of waiting and hoping that some miracle would convince the general to play by the rules of the new game in town.

Right after the GNU was formed, and even before it won the parliamentary vote of confidence, a spokesperson for Haftar welcomed the new authority. But other than this general statement, Haftar has done little else to show his support, or indeed that he is willing to respect and play by the rules as agreed in the roadmap that produced the GNU itself.

Furthermore, the roadmap designates the three-member presidency council collectively as the Supreme Commander of the Libyan army. Article two of the document, known as Prerogatives of the Presidency Council, states that the council have the authority to appoint the general commander of the army and all of his top subordinates, including the chief of staff and top-ranking officers. In theory, this means that Haftar is now a subordinate to the presidency council, despite the new council never having appointed him, but instead already found him in the post.

His ally, the eastern Libya government, has been peacefully dissolved to give way to the GNU. However, the parliament still recognises Haftar as its LNA military chief – a post carved out specifically for him seven years ago. At the same time, General Haftar does not have deputies or a clear ranking structure. He has assigned more power to his two sons, Khalid and Saddam, angering his supporters in Benghazi, his power base and beyond.

General Haftar’s role and position was one reason why the Libyan Political Agreement, signed in Morocco in December 2015, failed. It did not recognise him as the legitimate commander in chief of the army.

In his attempts to work around General Haftar, Prime Minister Abdul Hamid Dbeibeh cleverly did not name a minister of defence, but instead kept the job for himself. In doing so, he avoided controversy and pleased the general’s supporters in parliament with the potential of denying the GNU the vote of confidence it received on 10 March. Thereby, Dbeibeh is trying to gain extra time to, perhaps, manoeuvre out the old general without a fight.

For the general to maintain his LNA and power base, he needs money and arms, much of which comes from his foreign backers, including Cairo, Moscow and Abu Dhabi. Cutting this support is an essential step to weaken the general.

This is why Dbeibeh visited Abu Dhabi on 7 April, before heading to Moscow a week later. In both visits, Dbeibeh discussed economic and reconstruction contracts in return for cutting help to Haftar. Dbeibeh wants Moscow’s help in removing Russian mercenaries from Libya.

On 20 April, Egypt’s Prime Minister Mostafa Madbouly arrived in Tripoli for meetings and Memorandums of Understanding in different areas. Tripoli wants to give Cairo a stronger economic incentive to cut Haftar’s support. The ideal scenario is if Cairo stops helping Haftar and convinces him to accept what is being offered – free and fair elections by the end of the year.

Dbeibeh sent a different message to General Haftar by visiting Ankara and reiterating his support for the 2019 security and maritime deals – both of which Haftar criticised. Clearly, Dbeibeh wants to convey the message to Haftar that the GNU has foreign friends that are ready to help too. It was Ankara’s Syrian mercenaries and regular troops that helped defeat Haftar last June, and Ankara would do it again if needed.