Home / Normal / Mangoush to Italian parliament: Foreign forces must leave Libya. HSC: its not for government to reverse Turkey agreement to provide forces 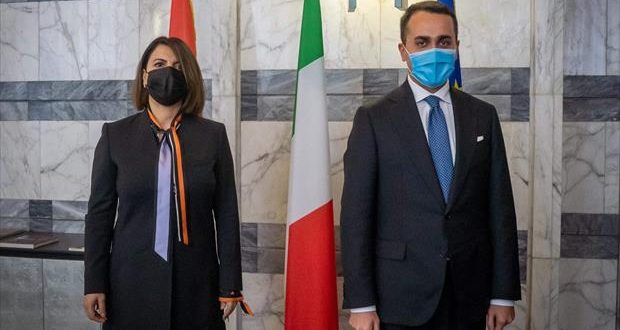 Mangoush to Italian parliament: Foreign forces must leave Libya. HSC: its not for government to reverse Turkey agreement to provide forces

Minister of Foreign Affairs and International Cooperation, Najla Mangoush, landed herself in a political storm yesterday after her address to the Italian Parliament during her Rome visit.

Delivering a speech on Friday before the Italian House of Representatives, in the presence of the Foreign Affairs Committee of the Italian Parliament in the capital, Rome, Mangoush said all foreign forces and mercenaries must be removed in order to implement the provisions of the Berlin Map and the Libyan Political Dialogue Forum agreement of Tunis and Geneva.

In Libya’s Ministry of Foreign Affairs report of her speech, Mangoush was not quoted as mentioning Turkish forces by name. However, an Italian news agency quoted her as saying Turkish forces.

This drew a reaction from Khaled Mishri the head of Libya’s High State Council (HSC). In a press statement, he said ‘‘it is not within the competence of this government to cancel any previous legal agreements or amend them according to what is stipulated in the tenth paragraph of Article 6 of the aforementioned Road Map.

With reference to the statements attributed to the Lady, the Minister of Foreign Affairs, which was transmitted through an Italian news agency.

We affirm our respect for the two parts of the agreement signed with the Turkish state, and we also respect any previous agreements in any field signed with other countries.

Regarding the presence of foreign forces on Libyan lands, this is a totally rejected principle, and it should not be the subject of discussion or auction by anyone, but everyone should be well aware of the difference between mercenaries and the presence of forces based on these concluded agreements.

We hope that the executive authority will pay attention to this and respect the roadmap in full and adhere to it’’.

Meanwhile, during her speech to the Italian parliament, Minister Mangoush affirmed the depth of the relationship and friendship between the two countries, which was embodied by the signing of the Friendship Treaty thirteen years ago.

The minister said that she would submit to the government a request for the recommendation of the Libyan parliament to move forward in creating a bilateral framework with the Italian parliament.

International Relations and Cooperation
All
2021-04-24
asaeid
Previous HoR members warn of expanding authority of sovereign positions’
Next Pentagon: Russian presence in Libya is worrying for the United States and Europe