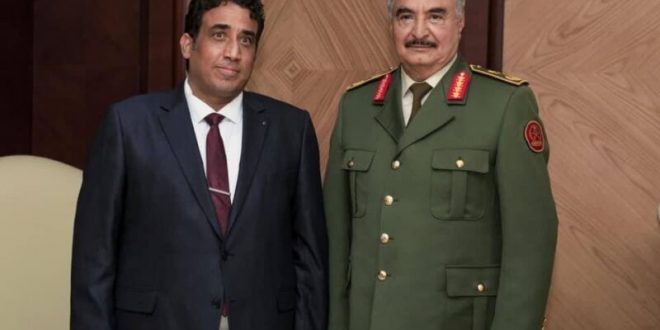 Libya’s Prime minister Abd Alhamid Aldabaiba vowed yesterday to visit Benghazi soon and that he would not let ”minor impediments” stop him and his government. The pledge came during a cabinet meeting during which he read out his government’s achievements in its short time in office.

The comment by Aldabaiba came after a plane carrying his forward security team was prevented from disembarking their plane at Benghazi’s Benina airport Sunday.

In response to the furore caused by the incident, the Khalifa Hafter Libyan National Army (LNA) General Command issued a statement.

It said it refutes what was stated in the ‘‘extremist media, which are abused by hate speech and discord regarding preventing the government from entering Benghazi’’.

It said it affirmed its full readiness to receive high-level delegations and to ensure their security and safety at the highest level.

It welcomed the holding of the government meeting but only ‘‘after coordination with the Ministry of Interior in Benghazi for protection and insurance and not to transfer militia elements from other cities’’.

It added that it ‘‘will not allow the passage of wanted terrorists and militia, and the smuggling of weapons and ammunition under any pretext’’.

It said that it has ‘‘police and regular security services with their expertise supported by trained military units capable of securing any delegation’’.

Adding that ‘‘We welcome holding a cabinet meeting in any of the areas we secure, especially Benghazi’’.

In conclusion, it added that it is ‘‘not linked to the government, whether sovereign, service, or even at the level of communication’’.