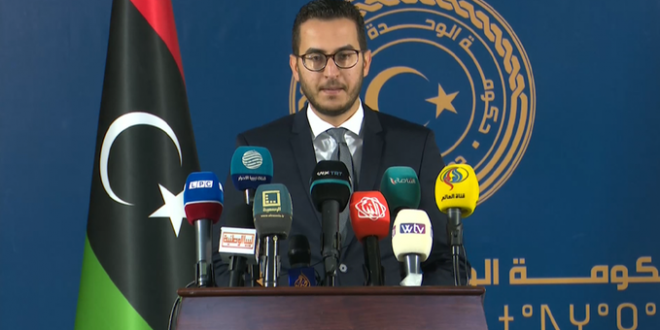 Libya’s GNU reminds all state military institutions to work under

Hammouda’s remarks came in a presser on Tuesday after the end of the GNU third meeting in Tripoli instead of Benghazi for reasons the Prime Minister didn’t disclose.

Dbeibah said in the meeting that some few parties didn’t understand the historic opportunity for Libyans to establish a real state and that the GNU would visit all the cities as it had already established a reconstruction fund for the areas destroyed by war such as Benghazi, Sirte, Derna and South Tripoli, vowing to ensure the right for all the displaced people to return to their houses so that the development and construction phase can move forward.

“We have liquidated 1 billion and 75 million dinars for wife and children’s grant, 107.000 families have benefited from Ramadan Gift gesture, and salaries’ promotions for January, February, and March have been added, in addition to implementing the order to raise public sector workers’ salaries by 20%, and allocating emergency funds for the National Oil Corporation.” Hammouda said, describing the work of the GNU over two months.

Hammouda indicated that the GNU imported 400.000 Coronavirus vaccine doses so far, as 60.000 people had now been vaccinated while the campaign continues across the country.