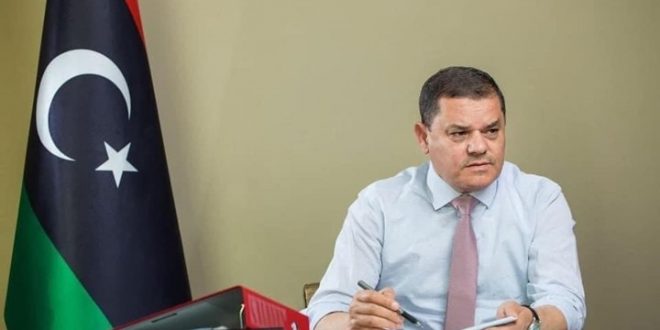 Libya’s interim Prime Minister, Abdul Hamid al-Dbeibah, warned on Thursday that there were attempts to restart the country’s conflict, also saying that foreign mercenaries had tried to block a government delegation from entering the city of Sirte.

In a speech in the town of Tajoura east of Tripoli, Dbeibah cautioned that “war merchants” were trying to re-start the Libyan conflict, saying that “there are people whose wealth is from this damned war.”

“We can say that the war is over, but there are those who seek to ignite it again,” he said, without mentioning a specific party.

He added that mercenaries had tried to prevent a Libyan delegation from landing at the airport in Sirte, an area under the control of rogue Libyan General Khalifa Haftar.

Russia, along with Egypt and the UAE, have supported Haftar’s self-styled “Libyan National Army” (LNA) which control most of eastern and southern Libya.

Mercenaries from the Russian Wagner private security company fought alongside Haftar’s forces during the rogue military leader’s offensive on Tripoli, which failed in early 2020 following counter-attacks by forces loyal to Libya’s former Government of National Accord (GNA).

The GNA resigned in March 2021 to make way for Dbeibah’s government.

“We could not enter Sirte airport, which is Libyan and on Libyan soil, due to the presence of mercenaries,” Dbeibah said, adding that the forces stationed there told the government delegation to enter the city by land, which it refused.

“We told them we will come by plane, and this is a Libyan airport, and no one can prevent us from disembarking at the Libyan airports,” he added, saying that foreign mercenaries had to leave Libya for national reconciliation to take place.

There are estimated to be more than 20,000 foreign mercenaries in Libya. The peace agreement signed in October 2020 says they have to leave the country but UN officials have noted that progress has not been made on this issue.

On Wednesday, Haftar’s “Libyan National Army” issued a statement saying that Dbeibah’s government could visit territory it controls but added that these visits had to be under LNA protection and that the government had “no authority” over the LNA.