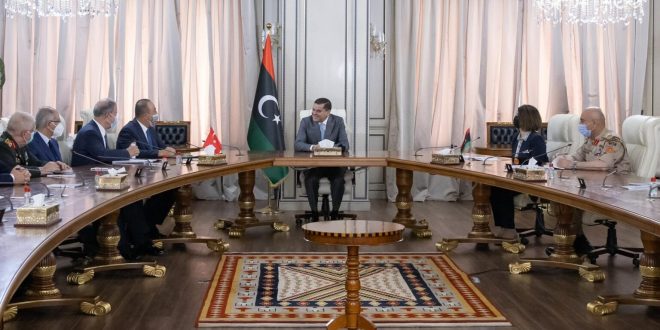 The delegation included member of the Ministery of National Defense, Khulusi Akar, the Chief of General Staff, Gen. Yasar Guler with National Intelligence Chief, Hakan Fidan, and the deputy head of Justice and Development Party (AKP) Efkan Ala.

A meeting followed the arrival cermony which was attended by Najla al-Mangoush, Minister of Foreign Affairs and International Cooperation, focusing on the prospects for joint cooperation between the two countries in the areas of economics, defense, military, and politics.

Cavusoglu also added that his government will continue to help and cooperate with the GNU until Libya achieves full security and stability and all of its institutions are unified.

Al-Koni a member of the Presidential Council emphasized the importance of institutional unity, especially the military, in helping to secure Libya’s southern borders.

Abdullah Al-Lafi, of the Presidential Council, expressed his appreciation for Turkey’s support in all areas as well as its contribution to international efforts to support Libya’s security and stability.