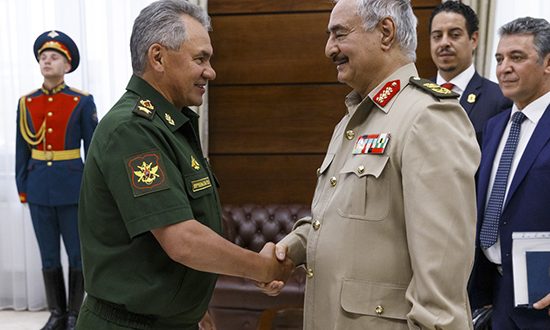 According to The New Arab’s Arabic-language sister service, Al-Araby Al-Jadeed, sources said it has taken five days for the intermediary Mohammed Rahhal to recruit 170 men for the overseas force.

They are largely from Latakia and rural areas to the west of Hama, and 35 percent of them are civilians.

They will operate with other soldiers for hire, including the Russian Wagner Group mercenary force.

Seventy-eight prisoners who fought on the side of eastern #Libyan warlord Khalifa Haftar have been released in Tripoli before the Eid al-Fitr holidayhttps://t.co/pQpqSGWZhS
— The New Arab (@The_NewArab) May 13, 2021

The 400 new mercenaries will be allocated to two groups.

The first will be paid $1,200 per month for three months’ service, with the others earning $1,500 a month for five, with $500 given ahead of time to family members.

Meanwhile, the pro-regime Jerusalem Brigade, also supported by Russia, is recruiting mercenaries for six months’ service to reinforce its numbers after attacks by the Islamic State group.

These attacks have left dozens of regime and militia fighters dead over the past half a year.

Al-Araby Al-Jadeed was told the intermediary Ali Sulayman is in charge of the $50-a-month contracts.

From among these recruits, 100 will be given just 15 days training prior to entering the fight against IS in southwest Deir Ez-Zor.