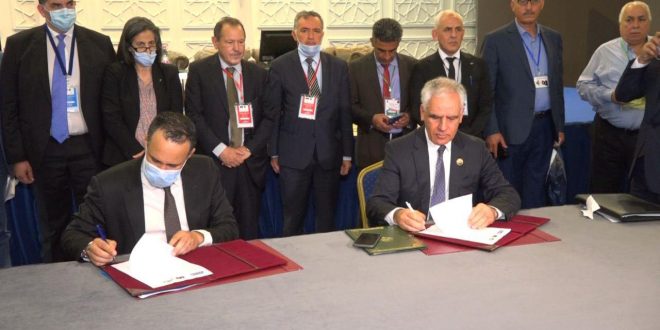 The President of Libya’s General Union of Chambers of Commerce, Industry, and Agriculture (GLUCC), Mohamed Al-Raeed, signed an economic cooperation agreement with the Director of the Algerian Chamber of Commerce and Industry, Wahiba Bahloul.

The agreement, which was signed on the sidelines of the Algerian-Libyan Economic Forum, included activating trade exchange between both countries’ Chambers of Commerce in order to encourage the sponsorship of trade and industrial forums and conferences.

In addition, discussions covered the possibility of the establishment of economic development projects in Libya in cooperation with Algeria in various fields, including the field of renewable energy and security.

Also covered was the possibility of reopening Debdab border crossing between Libya and Algeria, in order to ease the commercial movement between the two countries, along with the resumption of air and sea movement, which is hoped to contribute to reviving the economy of both countries.