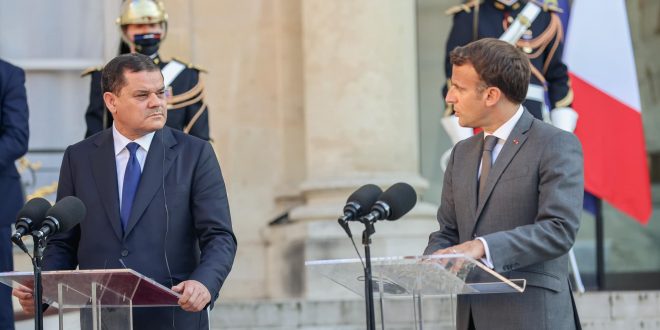 Abdelhamid Dabeiba, the Prime Minister of the Government of National Unity (GNU) stated that an agreement had been reached with French President Emmanuel Macron to reactivate the French-Libyan Joint Commission, which had been suspended since 2002, and to carry out earlier accords.

At a joint press conference with Macron in Paris, the Libyan Prime Minister expressed his joy at the restoration of official relations between his country and France, emphasizing France’s role in promoting Libyan political decision-making in international forums, particularly the upcoming Berlin II Conference and its outcome.

French President Emmanuel Macron, for his part, stated that his discussions with the head of the Government of National Unity underlined their shared aim to restore Libya’s sovereignty, stability, and unity, and emphasized that France would assist Libya throughout this transition phase.

Macron assured Libyans of their support in the areas of security, execution of the ceasefire deal, and a stop to all external intervention by expelling all mercenaries and international forces. His country was dedicated to enforcing the arms embargo on Libya and to assisting the Libyan economy by guaranteeing a fair, equitable, and transparent transfer of wealth in the country.

Macron also emphasized that the removal of foreigners from Libya would be complemented by the establishment of a unified army capable of ensuring peace and security throughout Libya.

The French President stated that France and the European Union view control of Libya’s land and sea borders as a priority, and that his country would ensure Libyan sovereignty through cooperation with neighboring African countries.

On the health front, Macron has hinted that a number of French doctors will be dispatched to Libya beginning tomorrow to assist in the treatment of dozens of cancer-stricken children.