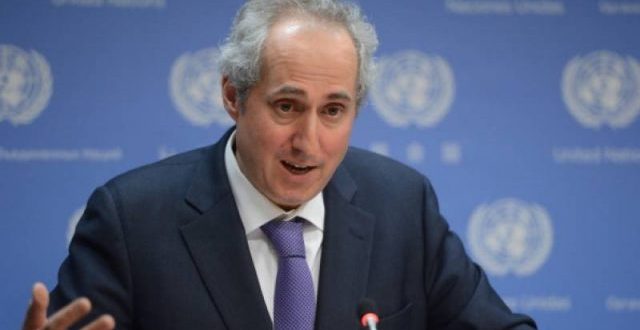 Withdrawal of foreign forces and mercenaries and reunification of key Libyan institutions focus of the Berlin 2 conference: UN Spokesperson

Commenting on Tuesday’s announcement by Germany of the 2nd Berlin Conference on Libya on 23 June, which is co-organized by the UN, Stephane Dujarric, the Official Spokesperson for the Secretary General Antonio Guterres said yesterday that, Guterres will address the Berlin Conference on Libya via video conference and his Special Envoy for Libya and also Head of the UN Support Mission in Libya (UNSMIL), Jan Kubis, will participate in person.

He said the conference will be an important opportunity to bring the international community together to take stock of the current situation in Libya and offer support to Libyans with regard to preparations for the conduct of national elections, which are scheduled for 24 December this year.

The withdrawal of foreign forces and mercenaries from the country as well as steps towards the reunification of key Libyan institutions will be a focus of the conference, he added.

International Relations and CooperationPolitical TransitionSecurity Situation
All
2021-06-03
asaeid
Previous AI drone may have ‘hunted down’ and killed soldiers in Libya, UN experts say
Next Russia invited to participate in Berlin Conference on Libya