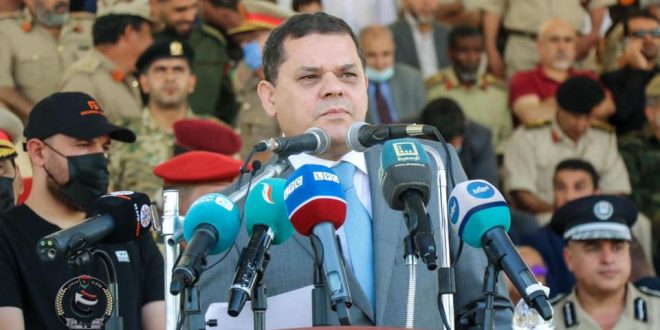 The Libyan Prime Minister and Defense Minister Abdul-Hamid Dbeibah said there are lots of challenges that are hindering the unification of the Libyan Army, expressing hope in the willingness of young people to serve their country.

Attending a commencement event for a new Air Defense College batch in Misrata, Dbeibah said Saturday that the energy of the young must be used to defend the country and the people not to help Libyans kill their fellow Libyans, urging the graduated cadets to defend Libya and protect its unity and sovereignty.

Dbeibah urged the graduated cadets to be professional and follow orders of their superiors in the best interest of the country, saying they are the real future for a unified army that will be built after training, professional ethics and respect for the people and the country.

About 400 cadets graduated Saturday from Misrata Military College, all of whom were part of the Volcano of Rage Operation that thwarted Khalifa Haftar’s offensive on Tripoli and had some intensive training throughout the course of a year.