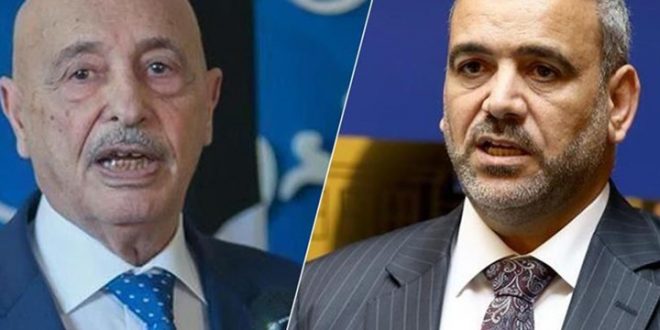 Ageela Saleh, the head of Libya’s parliament (the House of Representatives (HoR) and Khaled Mishri, the head of the High State Council (HSC) did not meet during their visits to the Moroccan capital Rabat.

The visit was billed as a summit to finally resolve the issue of appointing Libya’s outstanding five Sovereign Positions:

Their failure to meet face-to-face and put an end to the saga of the appointment of the Sovereign Positions has increased speculation that they were unable to agree on the main three positions of CBL Governor and heads of the Audit Bureau and ACA.

There are fears that the failure to finalize the Positions could drag on and spill over into a political tug-of-war affecting the approval of the stalled 2021 budget, legislation for elections, the removal of foreign forces etc.

As far as Ageela Saleh is concerned, the matter was concluded with agreement at Bouznika, implying that it’s the HSC that is holding the process up.

There is also a law before the House of Representatives for its issuance on how to elect the president in Libya.

There was also an agreement in Bouznika, in the brotherly Morocco, to name the Sovereign Positions or to form them according to the regions in Libya.

We (the HoR) have now fulfilled our commitment and started implementing the agreed upon mechanism of selecting the heads of these positions.

The House of Representatives has prepared the necessary files and sent them to the (High) State Council.

We are awaiting the response of the (High) State Council in order to name the Governor of the Bank of Libya and the head of the Audit and Administrative Control Bureaux and other sovereign bodies operating in Libya.

We affirm from here once again that we reject any foreign presence in our country and demand the removal of mercenaries, the dismantling of militias, and the transition to the elections scheduled on 24 December 2021, and this is the demand of the Libyan people.

We affirm that the Libyan people are the ones who choose who governs the country by direct secret election under the supervision of the United Nations and the League of Arab States’’.