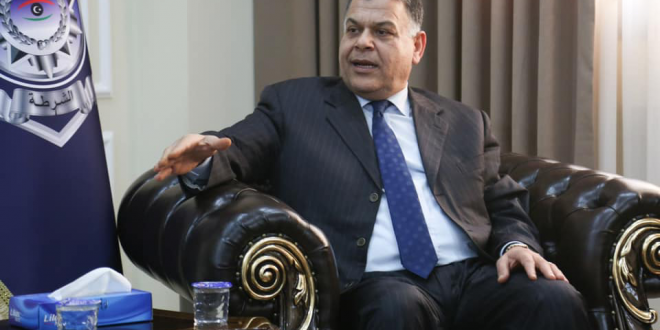 The sources stated that in the coming days, the minister would announce a decision to dismiss the current head of Libya’s Civil Registry Authority (CRA), Mohamed Bettamer, and replace him with Brigadier General Adel Abdulaziz Al-Arifi, known for his loyalty to Haftar.

During the period of authority division in the country, Al-Arifi was the under-secretary of the Interior Ministry in the unrecognised government of Abdullah Al-Thani. He also held several positions in the internal security apparatus of the former regime between 1994 and 1995, and was a leader of the Criminal Investigation Department and the fight against heresy services.

The sources stated that Al-Arifi informed the CRA director in Benghazi, Osama Al-Darsi, and security leaders in the eastern region that he will head the CRA in the coming days.

The sources also revealed that the interior minister confirmed to security leaders in his ministry that he intends to issue decisions to appoint pro-Haftar officers to prominent security positions, with whom he met in Tripoli during the past days. One of the appointments, Brigadier General Salah Al-Khafifi, will be appointed Commander of the Central Support Service.

According to the same sources, the minister of interior will also appoint the security manager in the city of Tobruk, Brigadier General Khaled Al-Basta, as commander of the Central Support Service in the eastern region.

Al-Basta, one of Haftar’s loyalists, held several security positions, namely, heading the Security Directorate in the city of Al-Bayda, following tribal pressures that amounted to threatening to close the directorate if Al-Basta was not appointed as leader.

Haftar triggered a new escalation at the end of last May, when his forces held a large military parade in eastern Libya with the participation of Sudanese and Syrian mercenaries, which the Libyan Presidential Council considered a “military breach”.

On 16 March, a transitional authority comprising the Government of National Unity (GNU) headed by Abdul Hamid Dbeibeh and a presidential council led by Mohamed Al-Menfi, assumed its duties to lead Libya to parliamentary and presidential elections on 24 December.