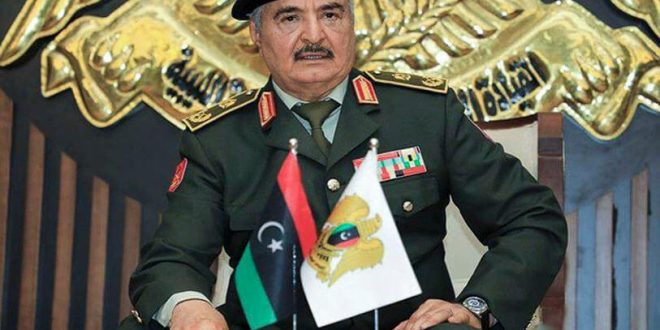 Libya’s eastern commander Khalifa Haftar is planning to escalate military activity in the country before the end of the year in order to disrupt the elections scheduled for 24 December, reported the New Arab newspaper.

The newspaper quoted private sources in Cairo, who said the Egyptian government was not backing Haftar’s plan.

“So far, Cairo rejects this plan, and has clearly informed Haftar, during the recent visit of Egyptian intelligence chief Abbas Kamel to Benghazi, that it would not allow such steps to be implemented,” said one source.

“[This is] because of the risks it might pose to Egypt’s national security and to western borders again, in light of Haftar’s inability to resolve the conflict in his favour militarily.”

Estimates by the Egyptian security services indicate that the plan would “lead to the continuation of the turbulent conditions on the western Egyptian borders, the halting of economic efforts aimed at strongly involving Egypt in the reconstruction of Libya and the return of Egyptian labour force in large numbers”.

The sources pointed out that the major dispute at present emanated from a failure by Egypt, Turkey and the Libyans to reach an agreement over the extent of Egypt’s participation in the Libyan reconstruction process on the one hand, and the Turkish companies’ control over the largest share of the reconstruction projects on the other.

The sources confirmed Ankara’s adherence to maintaining the presence of Syrian fighters in Libya and its desire to establish a Turkish military base to secure its interests, which Egypt categorically rejects.