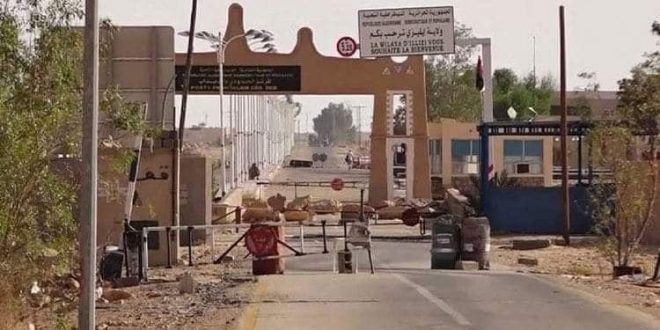 An Algerian media website specialising in security and military issues has said that the claim that Libya’s Field Marshal Khalifa Haftar took control of the Issine Border Crossing is fake news. According to Mena Defence, the story was fabricated by pro-Haftar media as part of the psychological warfare against Algeria following statements made by President Abdelmadjid Tebboune during an interview with Al Jazeera.

Tebboune told the news channel that Tripoli is a red line for Algeria. He insisted that he will not accept that the Libyan city could be the first Maghreb and African capital occupied by mercenaries, and pledged to intervene if necessary. “In one way or another, we will not stand idly by. When we said a red line, in fact, it was a red line, so the message was well understood and Tripoli was not occupied.”

Tebboune told the former head of the Libyan Government of National Accord (GNA), Fayez Al-Sarraj, the same thing in January last year. At the time, Haftar’s forces were near Tripoli but failed to reach it, despite managing to impose a siege on the area for several months.

The pro-Haftar channel Libya Alhadath TV broadcast the news about his forces taking control of the Issine Crossing at a time when a military operation was launched in southern Libya to “eliminate terrorism”.

Mena Defence explained that after “checking with local actors, the presence of Libyan National Army forces was observed only in the vicinity of Sabha and Tamanhent, accompanied by Russian reinforcements.” It noted that the Ghat region on the border with Algeria is controlled by the Tuareg leader Ali Kanna, an ally of the government in Tripoli.

The website confirmed that the photos published by Haftar’s loyalists were not taken in the Issine area, but were old photos taken while Haftar forces were taking control of Tamanhent.