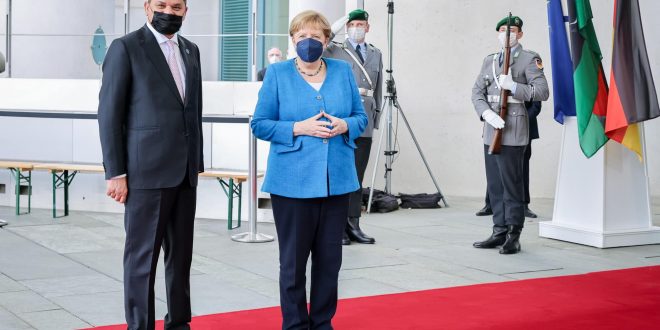 The Libyan Prime Minister, Abdul-Hamid Dbeibah, proposed a four-point initiative at the Berlin II Conference on Wednesday, saying that the initiative bolsters efforts leading to Libyan general elections in December.

Dbeibah said in his speech at the Berlin II Conference that the first point is about security, adding that there are concerns about the political process based on the military power of mercenaries in certain areas, in addition to the presence of forces linked to political agenda as well as the presence of terrorists.

Dbeibah also indicated that his government had started to prepare a conclusive security plan to secure elections and they are waiting for the elections legislation, hoping to receive support and assistance from the Berlin II Conference participants in the withdrawal of all foreign forces and mercenaries.

Dbeibah said the second point is related to the legal process for elections that is out of the scope of the government’s authorities despite being the fundamental stone on which elections are built, adding that legislative bodies haven’t shown serious efforts in this regard so far.

The Prime Minister said the third point is about national reconciliation, adding that the government had begun working on national reconciliation and that the work is part of a track of efforts and cannot be tied as a condition for holding elections but rather a way to move forward in building Libya and entering the political life, that should contain all people, including the displaced inside and outside Libya.

Dbeibah also reiterated the need for fair and just distribution of state revenues across Libya, which is the fourth point, and to provide services to all Libyans equally in a manner of “districts” system to leave behind the centralism system that has burdened Libyans’ lives for years.

Dbeibha also called on Libyan parties to fulfill their commitments as the four-point plan needs funding, urging the Berlin II Conference attendees to support Libya and efforts to deter spoilers of the political process.